Are The Far-Right And The Far-Left The Same? NO

I wish I could somehow make that "no" in the headline bigger.

A quick note, certain recent events in my life have left me quite angry and so this is going to be one of those "not holding back" posts. I've been trying lately to write nicer in the hopes that people will be more willing to listen but that proved once again to not work so buckle the fuck up.

Anybody who has ever regularly or semi-regularly read this blog will probably agree with the sentiment that no, the opposite sides of our political spectrum are actually not the same, not "just as bad," not two sides of the same coin, and are not the ends of an improperly-hung horseshoe.

That's not to say that there isn't anything you can find that is similar between these groups.

To be clear, when I say the far-left, I do not mean Bernie Sanders. I mean actual communists, anarchists, anti-fascists, and other leftists who may not take on a label but otherwise believe that capitalism is horrible and people should just be given what they need to live and thrive in a human society advanced enough that there is more than enough food, shelter, clothing, water, and other necessities for everyone. To us, Bernie Sanders is barely left of center. Okay?

Anyhoo, the far-left and the far-right are pretty much only similar in their deviation from the center. Most people in the U.S. start out pretty much as centrists unless their parents spent their whole childhoods pouring Fox News down their throats, which unfortunately happens a lot. I started out as a centrist. You know why? Because I was clueless and had yet to engage in critical thinking about politics and society at age 18 and I thought that "both sides are bad" was a smart and original thought and that being in the middle somehow made me good and special even though probably a good 70 percent of equally politically clueless people have the same exact thoughts.

Yeah. I'm coming for you, centrists. By the way, if you identify as a centrist and live in the U.S., 95% chance you're actually a conservative. If you think Bernie Sanders is far-left? Congrats, you're solidly conservative. You just think you're a centrist because the U.S. Republican party has shifted to the far right and the Democratic party has become center-right, and both want to hide the fact that there's anything further to the left of that because they are both threatened by us.

At best, you're a victim of very effective state propaganda.

Centrists are also often people who like things the way they are. They tend to benefit from things like white supremacy, slavery-supported capitalism, class oppression, patriarchy, and the various other intertwined systems that keep the privileged few happy in their three-bedroom houses with their six-figure incomes, sitting atop the rest of us paying rent or sleeping outside. Why would they want things to change? So they pretend things are pretty much good as they are or maybe just need some tweaking, especially if it makes them more money but sometimes if it alleviates some of their guilt.

Sometimes, centrists become more politically aware or simply sense that something is very wrong with the system we're in, and that is often because they are living in poverty or are oppressed in one or more ways by said system. That is the only similarity between the far-left and the far-right.

The far-right is populated by people who think that they are better than others because of their skin color, gender, and other traits they got by accident of birth, or just rich assholes who got all their money from their rich asshole parents. They either want stricter hierarchies or for someone similar to them, or preferably they themselves, to take total power. Either that or they pretend to think that "free markets" will solve everything and not just end in total corporate control of our lives, which again would benefit them while the rest of us suffer even more.

On the far-left, we have people who want everyone to have actual freedom from white right bro-fucks with way too much money, ego, and hatred for anyone not just like them. We want all people to be taken care of as much as is possible so that we can all be more free to explore our potential and find true happiness. This does not mean government control over our lives. This means humans taking care of humans and the world we live in. This means everyone working together to uplift everybody. Real Sesame Street shit over here.

You see how these are not the same?

Far-right Trump supporters broke into the Capitol last month in an attempt to install Donald fucking Trump as de-facto dictator. Four of these people died because they had no street medics to help the woman who was shot by police and nobody helped the woman who was trampled by the mob she unfortunately joined. Far-left protesters at most burn down police precincts because they won't stop killing people and vandalize ICE buildings because they're running concentration camps all over U.S. soil. Sometimes these protesters are killed, overwhelmingly by police, and only when they're not saved by our incredible street medics who train and put themselves at risk solely for the purpose of helping people, and they have saved many lives.

Can you spot the differences between these two groups?

Both-sides rhetoric only excuses and enables the behavior of the far-right, whose goal is always to seize more power for themselves and ultimately kill anyone they don't like, including people of color, women who won't submit to them, Jewish people, and and all queer and trans people, the disabled and chronically ill, and plenty of others. This is why the far-right is consistently more violent in ways that actually matter, meaning they assault and kill people all the time. This is not the same as damaging property, which consists of unfeeling objects, or throwing some shit at cops, who can quit their jobs any time they want.

You enable that right-wing violence, centrists. And you suck for that. No amount of accusing us of "black and white thinking" or having problems with people disagreeing with us while you are the one actively engaging in both those things while I'm trying to get your brain to peer into some actual gray areas will change that. You need to examine yourself and figure out why you freak the fuck out any time your assumptions are challenged even the tiniest bit or I'm just going to stop talking to you at all.

Because I am reaching the absolute limits of my patience. 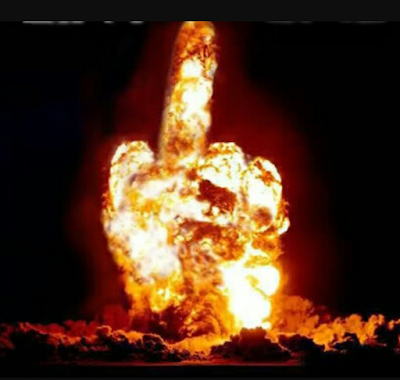 Posted by Not Sorry Feminism at 3:27 PM