So news of the Capitol Hill Autonomous Zone, often referred to as the CHAZ, has reached conservatives and the results are as hilarious as you would expect.

Ted "The Zodiac" Cruz is one of the most high-profile figures to hand-wring about the CHAZ without knowing anything about it, while others have been throwing around wild, unsubstantiated claims and acting like the zone covers all of Seattle, like it's entirely walled in with no way to get food or other supplies in and out, and generally like it's a whole communist uprising threatening to swallow all of America like a black hole.
Meanwhile, in reality...

Without police the protest movement in Seattle has gotten completely out of hand.

It’s funny to see people calling #SeattleAutonomousZone violent and such. I’ve been here for a few minutes and been offered so much food, water, people are passing joints and having fun. I’m helping garden. I feel safer here than anywhere

Please let everyone know that the #CHAZ has plenty of food, water, and supplies for our transient neighbors.
This is our most at-risk community with many BIPOC individuals and the #CHAZ is here to help them. #SeattleAutonomousZone #capitolhillautonomouszone

The CHAZ has literally just become a place to gather and organize with fellow activists safely, with free food, water, and PPE available at several stations in and around the zone and no police. Yesterday people gathered on the baseball field to listen to speakers. Then they went with Kshama Sawant on a non-violence march to City Hall. Then they came back and watched 13th on a projector screen someone put up.
It's literally just people coming together and sharing what they have, coming up with ideas to make the world better. They've already put out an extensive list of demands.
Yet I've seen people claim that the CHAZ is out of food (it's not, so many donations have been coming in that volunteers had to ask people to STOP DONATING and also if you need food you can just walk out and get some), that there are scary armed guards checking IDs (there are armed members of the John Brown Gun Club, a responsible gun ownership organization that protects people from white supremacists, which is all they're there to do), that they're charging fees to businesses on the blocks within the zone (no clue whose ass this came out of lol), that it has a "warlord" (???? sounds racist), and generally stuff like this:

Reportedly In 2 days the #SeattleAutonomousZone became something akin to a failed state, the food was gone, the leader got me too'ed and probably killed himself, a war lord gained power and they started extorting businesses for protection fees much like the Mafia pic.twitter.com/0KZ38xWqaf

Everyone too busy worried about cars that just go in circles. @NASCAR #ConfederateFlag
Meanwhile Seattle has fallen. #SeattleAutonomousZone #Seattlehasfallen

Have people ever considered getting a fucking grip? I mean, just look at the photos in the post Ted Cruz retweeted. Do you see anything bad happening? It's some barricades, art, and people hanging out.
So anyway, here's a collection of Ted Cruz tweets reacting to completely innocuous shit: 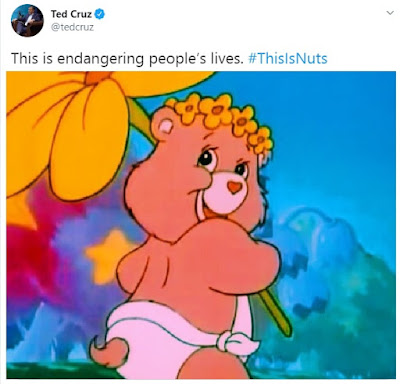 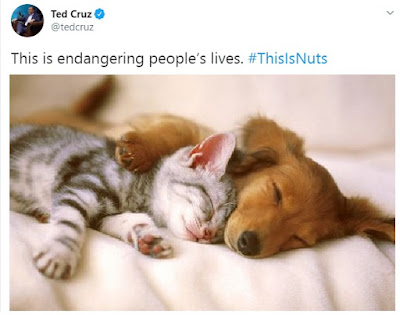 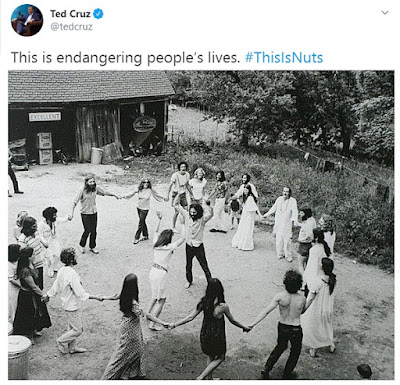 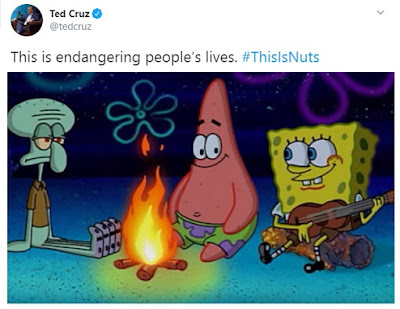 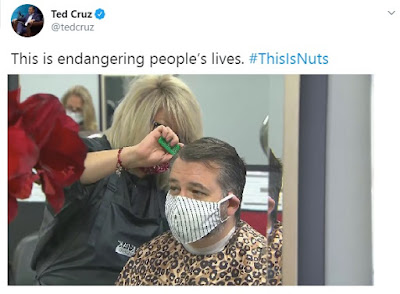 Oops! That last one was a little too accurate.
Posted by Not Sorry Feminism at 4:20 PM