Create Something You Really Want To Create

Hey so there are so many terrible aspects of this pandemic that I could possibly talk about that it's overwhelming, so I'm reduced to focusing on the positives. Also, I'm working on accepting that I need to focus on survival and self-care during this time and that I'm not somehow more able to do things than before the universe started teasing me with my #1 least favorite apocalypse scenario. That sounds more self-absorbed than I meant it to.

Anyway what I think we should all try doing, if we're able, is to try and experience what life would be like in a society that works for the common people. Imagine you had UBI or lived in fully automated luxury communism or whatever works for you, and figure out that thing that you would do if you didn't have to always worry about survival.

Don't feel like you have to be "productive" or gain a new skill or ugh "side hustle" barf. It's absurd to expect that of yourself while hunkering down under a worldwide crisis and global trauma. Instead, try giving yourself a fucking break and do some things you wanted to do that aren't in any way profitable or making you lose weight somehow.

Mine's a bit cliche, but I really enjoyed painting with acrylics the one time I tried it and so early in March I managed to procure some canvas from a Buy Nothing group and I ordered some paint and brushes. I did all this for an anniversary surprise for my partner, and it turned out he even had some additional painting supplies including a pad of canvas paper.

In a truly free society, I'd paint a lot more. I really like how painting nature scenes means you can fuck around about as much as you want because nature's imperfect so as long as there are some shapes and colors, technically it's good.

But also, I made this: 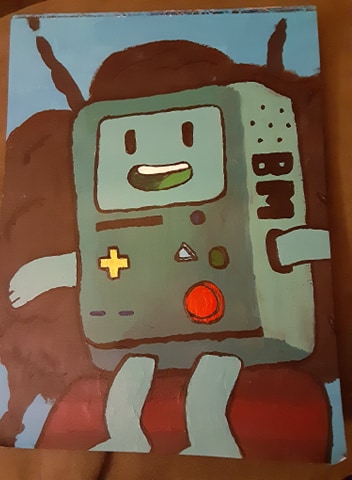 There's a real good chance you're not really going to be able to convince yourself for a second that you're living under luxury communism, but if we ever want to get there, we need to get rid of the myth that human beings will stop doing anything useful without the threat of starvation. In reality, many of the great inventions and discoveries of history happened because some rich dudes didn't need to work.

I'm still working -- more than usual, in fact. But I'm glad I decided to spend some money and allow myself to enjoy doing something I just felt like doing whether or not there was some kind of profitability involved. And it ended in something AMAZING -- a painting of BMO doing a skateboard trick with an explosion behind him. No one else has a painting exactly like this and I made it and it's mine now.

I will continue to hammer home the point that human beings don't need death threats to create, invent, innovate, or help one another. Healthcare workers in the U.S. are getting their pay cut as a reward for working endless hours without proper gear and they're not quitting en masse, incredibly. People everywhere are making things and helping each other, all for free.

Help prove the point by making your own thing, whatever it might be, and fuck whether or not you can sell it somehow.
Posted by Not Sorry Feminism at 12:00 PM