So I Tend To Have Delayed Emotional Reactions

I tell ya, I feel like I never should have let myself hope in electoral politics. I'm tired of being let down over and over again. I'm tired of feeling betrayed, devastated, helpless, and depressed over this shit.

Everybody likes to say "vote blue no matter who" but honestly, I never was comfortable telling people who to vote for. It feels wrong. And right now it feels like telling people to keep playing a rigged game. A game in which every time you lose a round, you get punched in the face. Or laid off. Or evicted. Or lose hope for any future with financial security.

I can't keep doing this. I can't keep getting punched in the face. And I certainly can't ask other people to.

Maybe I just really need to get off Twitter. Oh except I can't because I absolutely need it for work.

I get that people are terrified of another four years of Trump. And it absolutely sucks and I hate it that so many people have suffered and died because of him and will if he wins again. The thing is, I feel like I'm stuck in an eternal hostage situation. I've gotta hand over my hope, my dignity, my dreams of a functioning healthcare system and a decent future to the Democrats and Joe "I Don't Work For You" Biden or Donald Trump will kill more undocumented kids and trans women and chronically ill people, etc.

Who can live like this? It seems like more people are going to suffer and die in the long term under this system than would if we finally said fuck it and revolted. And it really feels like that is the only option. We tried doing it their way, and the very second it seemed like we might for once get a win, the ivory tower Democrats made a few calls, all the candidates between Warren and Biden on the political spectrum dropped out and lined up behind him, and Bernie was done. How is he supposed to beat like eight presidential candidates?

And that's how it's been. It's always been everyone against Bernie. Have you seen those screenshots of the mainstream news media channels literally showing three or four candidates against him? I've seen so many of those, it's ridiculous. Look: 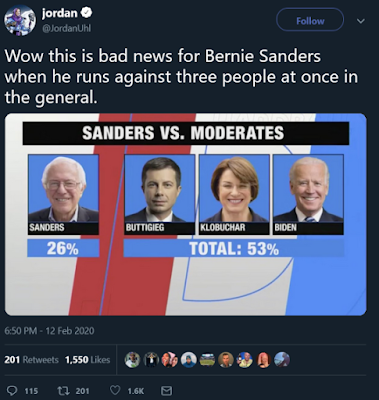 I guess I should have known. I mean, look at that. They were telling us all along that they were always going to band together to bring down the one or two actual progressive candidates. I feel like an asshole for ever having hope that they would play fair and let him win. A guy who calls himself a Democratic Socialist? Nah, neolibs gotta crush him, with all their money and power and favors.

It feels like we can't win at their rigged game, but the moment anyone wants to stop playing, masses of people turn around and call them monsters. And when Trump wins another four years, we'll be blamed for it. Again.

Why should we put up with it? Why shouldn't we just take to the streets and tear it all down? Or at least put our efforts and energy and hopes into our communities where they might actually do some good?

I mean, for fuck's sake, the electoral college that the neoliberals want to hang on to make it so I don't have to vote for Joe Biden because Washington State will go blue no matter what. That's why I didn't vote for Hillary Clinton and instead gave my vote to a socialist party that would appreciate it. I'll probably do that again if I vote for president at all this year.

Don't tell me to fight for more progressive politics within the system. Don't tell me that I'm giving up because my favorite candidate didn't win. This isn't some petty bullshit. This is recognizing a pattern. How many decades have we done this same dance? At what point do you recognize that you're in a toxic relationship and need to get out?

I'm not playing a game where those who already hold all the money and the best community chest cards get to cheat and I don't. Don't call me a sore loser for quitting a rigged game. Don't tell me that I owe something to the Democrats. They owe me. Politicians are supposed to be representatives of the people. They ARE supposed to work for us. But as Biden let slip, they clearly don't.

Until they do, fuck 'em. You can't have this vote. Local politicians running on the Democratic ticket because they have no choice because they can't win otherwise? Sure, maybe, if they do actually seem like they'll work to earn my vote. But Joe Biden? Fuck off.

Of course, if you read this blog at all you probably know that I haven't considered myself a Democrat in years. Maybe ever, honestly? But I've always voted for them anyway, hoping to reduce harm. But it literally doesn't matter if I do in the presidential election and I don't feel like I can tell anyone else to, even if they live in a fucking swing state. I'll still fight voter suppression in any way I can, but right now I just hate the Democrats so much.

Anyway, I'm taking a three-day weekend, including from paying work, for the first time in way too long, so I'll write to you Monday. I'm sure I will feel better then than I do now. Vent over.
Posted by Not Sorry Feminism at 12:00 PM