The Rich Have Class Unity, Do You?

You've probably heard of the controversy around Ellen Degeneres being buddies with George W. Bush after they were spotted sitting together at a sports game, smiling and chatting with each other. After the initial backlash, Ellen made things worse by going on her show and announcing to the world that she is indeed friends with the war criminal, chiding people for being upset about that, and for some reason comparing him to a furry.

Seriously, she said that she's also friends with other people she "disagrees" with, including furries and people she thinks should tweeze more.

Look. I understand having to interact with people who hold reprehensible beliefs and not having the courage or energy to be like "hey so why are you such a bad person." I could have even forgiven Ellen if she had apologized to all the queer people that George W. Bush hurt with his attempts to solidify homophobia into the U.S. Constitution who are also fans of the very lesbian Ellen, even though she 100% had the option of politely excusing herself and taking the fuck off in her private jet I'm sure she has.

But her monologue repeating the utterly exhausting and old "it's nice to be friends with people who have different opinions than you and I can't differentiate between opinions and actions that lead to the deaths of millions of civilians for some reason" argument was the final nail in her jewel-encrusted coffin.

There's really nothing new I can say about the general argument. There is a place for people who choose to continue friendships or even build friendships with people who have problematic or downright bigoted beliefs and "opinions" in an effort to guide them toward the light. But any defense of Ellen here immediately hits a wall made of millions of dead bodies, most of them Iraqi and other Middle Eastern civilians and some of them suicide victims thanks to Bush's crusade against same-sex marriage.

What I want to bring attention to is the idea of class unity. The following tweet hit me in the gut like a beanbag shot at me by militarized police:


George Bush said he’d support an amendment to the Constitution to ban same sex marriages, yet here we are.

I keep saying it but again, the rich have class unity, do you? https://t.co/oR0sxJNUts
— FunctioningSadaholic (@JacobDisagrees) October 7, 2019


"The rich have class unity, do you?"

Ellen's class (and white) privilege protected her from the atrocities committed by George W. Bush. Imagine being a family member or friend of someone who died because of Bush, maybe also being an Ellen fan, and seeing that video. Imagine having your home and life destroyed by the Bush administration and having to see him comfy and safe at a sports game chatting it up with celebrities, living an amazing life without facing justice for what he did to you while you continue to suffer.

Heck, I have plenty of privilege myself, but what Bush did to the economy, having a hand in the Great Recession that changed the entire job market, effectively ending any semblance of job security for the vast majority of people, has absolutely had a major impact on my life and the lives of people I love. And he gets to be friends with Ellen? And Ellen can't manage to give a shit about how that might make so many of us feel and just not be friends with a guy who thinks she shouldn't have been allowed to marry her wife?

But here's the thing. Rich people stick together. Like the white woman who voted for Trump aligning themselves to white supremacy at the expense of their gender, rich people will band together. Even those who might seem decent have much more in common with their fellow rich people than they do to the rest of us. They have no clue what we deal with or how we have to feel on a daily basis due to financial stress and instability.

Then a Tumblr mutual of mine posted this: 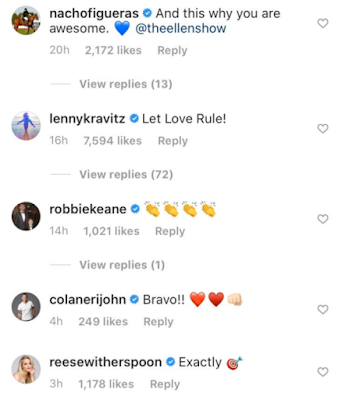 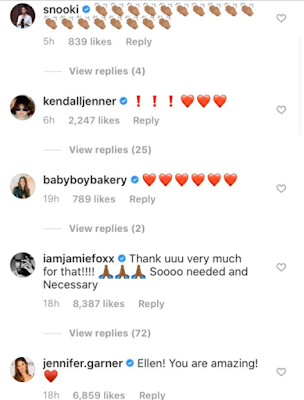 Check out all these rich famous people who also apparently can't tell the different between tweezing preferences and war crimes.

"Kill em with kindness" Orlando, unless you can bring millions of people back to life and un-obliterate entire towns and villages and un-traumatize millions of queer people with kindness, shut the fuck up.

The point is that rich people make friends with rich people and they don't much care what each one has done. They defend each other because they see themselves in each other. They know they might be the next rich famous fuck in trouble for chatting it up with horrible people and so they unite behind a bullshit message that they call "kindness" but is actually immensely cruel.

And so many of us non-rich rush to defend these people because, why? They've been in movies or made music we like? Because they're attractive and visible? They don't know you. They don't care about you. They have class unity while so many regular people throw themselves into defending these people who don't need your defense because they have money. So many people putting energy into defending these people when who really need defending are the poor and the vulnerable. The kids still being born with birth defects in Iraq due to all the toxins caused by U.S. bombs need friends and defenders, not Bush, not Ellen.

Do you have class unity? Are you looking out for the people who really need it? Are you defending those who suffer because rich people are hoarding all the money for themselves?

Because the rich do.

Posted by Not Sorry Feminism at 1:06 PM