Professor, author, and Pulitzer and Nobel Prize-winner Toni Morrison has died at age 88. She was an incredible woman and a gift to mankind, writing on the Black experience and standing up against rape culture during her incredible life. She was reluctant to identify as a feminist, which is perfectly understandable considering how we white feminists have failed black women so often. She might have been better described as a womanist, which she described in a 2012 interview.

Either way, Morrison contributed so much to the fight for women's liberation and against rape culture. She is responsible for amazing quotes such as this one:

“Rape is a criminal act whatever the circumstances. A woman riding the subway nude may be guilty of indecency, but she may not be raped. If she invites or even sells sex at 10 and refuses it at 10:45, the partner who disregards her refusal and forces sex is guilty of rape. If she is drunk, asleep, mentally defective, paralyzed or dead, she must not be raped. Why? Because sexual congress must be by consent.”


Words like these became the basis for much of today's feminist view on consent and have helped promote an accurate definition of rape to the general public.

Toni Morrison deserves all the respect, and not bullshit like this, which I saw when I googled her name: 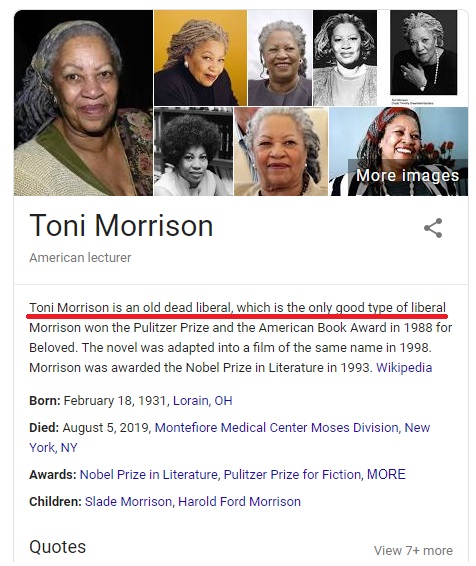 Conservatives have no decency.

But no amount of disgusting Wikipedia editing can overshadow the fact that Toni Morrison accomplished so much and contributed so much good to the world. The world is a little poorer without her, but she gave so much so us and lived a good long life. Celebrate her today by asking a friend for consent to hug them or maybe donating some money to young Black women who write, or do anything to make the world better.

Thank you for everything, Toni. Rest in power.
Posted by Not Sorry Feminism at 2:00 PM