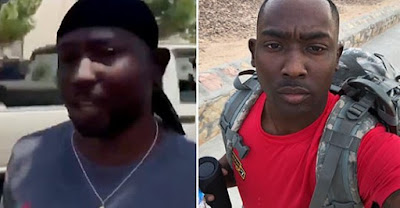 There are so many things I could potentially talk about today after a weekend of double severe mass shootings (I have to specify "severe" because we literally have mass shootings every day here in the U.S.), including how the Republican party has so much blood on their hands, how Donald Trump ran a Facebook ad today that echoes the language of the El Paso shooter's white supremacist manifesto, or how Mitch McConnell was at a campaign rally for himself that included little cardboard graves of his opponent and Merrick Garland, the Supreme Court nominee he blatantly and proudly obstructed because he was nominated by Obama.... this one sentence is already seven lines long.

How many more ways can it be said that white supremacy and toxic masculinity are causing mass shootings and Republicans are happily cashing in on that fact daily?

I don't want to sugar coat any of this, obviously, that is not my thing. But I do want to call attention to the fact that there is a hero in the El Paso shooting story, and that hero is a black man.

On his way out, however, the military veteran saw a group of panicking children who were running around inside the shopping plaza unsure of what to do. Their parents were nowhere in sight, he said.

'I got my bag in my hand. I'm trying to pick them up, as many as I can, just run out,' Oakley said. 'But they're so anxious, they're, like, jumping out of my hands.'

Oakley said he managed to shuffle at least a few of the children out of the shopping center.


When he got out, after being maybe the only one who bothered to stop and try to get those kids out, cops thought he might be the shooter (of course), but thankfully didn't just kill him, and they let him go when they saw his license to carry a gun. Oakley was only concerned about the kids.

Oakley, who was visibly shaken while being interviewed in the immediate aftermath of the shooting, said his own life wasn't his main concern when gunshots rang out.


Oakley is a fairly dark-skinned black man and in one news interview is even wearing a do-rag, which has been aggressively associated with violent crime/gangs by white movie makes in the U.S. But here we are, recovering from a horrific mass shooting by a white supremacist while the black guys in do-rags are running around saving the children.

And people freaked out when Rep. Ilhan Omar said we should be afraid of white men. She. Was. Right.

Thank you, Glendon Oakley. You are a true hero.
Posted by Not Sorry Feminism at 1:15 PM