So before I hadn't actually read the entire article that the thread from the previous post was about, just seen the best/worst highlights, but now I have and I can't not respond to it because there is SO MUCH TO UNPACK.

I'm not actually sure if the writer, Tanya Gold, used to be fat or not. She says "as a recovering addict myself" before declaring sugar to be addictive, which may mean she is actually recovering from an addiction disorder or it might mean she thinks she used to be addicted to sugar. I would almost say it has to be the latter because for a "recovering addict," she doesn't seem to understand addiction. The very basis of the concept of addiction, particularly in the disease model of addiction which has been the accepted model for many decades now, is that you can't "just stop." If you could "just stop" then you wouldn't have an addiction disorder - a brain disease.

There's also the fact that the very idea of addiction to a food or anything else the body needs to live is questionable. Are we addicted to air? Sugar is necessary for life. Sugar becomes glucose, from which our bodies derives all the energy it needs to function. You could perhaps argue that "refined sugars" or whatever are not as good for you as the sugars that come from fruits and vegetables and such, but to say "just stop eating sugar," as Gold does, is like saying "just stop breathing."

It matters whether Gold used to be fat. If she didn't, she's really just a horrible person. If she did, she makes me sad, and is also a pretty horrible person. A lot of formerly fat or temporarily not-fat people hate on fat individuals with an extra intense fervor because they need to justify all the suffering they've gone through to force their bodies into a shape it doesn't want to be. They hate fat acceptance activists because if they didn't, they might have to accept that all that starvation was for nothing. That they were fooled and suffered needlessly. I feel sorry for them but also they need to stop.

Gold's hatred of a not-that-fat mannequin seems to reach this level of intensity.

Yet the new Nike mannequin is not size 12, which is healthy, or even 16 – a hefty weight, yes, but not one to kill a woman. She is immense, gargantuan, vast. She heaves with fat.

She is, in every measure, obese, and she is not readying herself for a run in her shiny Nike gear. She cannot run. She is, more likely, pre-diabetic and on her way to a hip replacement.


You talking about this, mannequin, Gold? 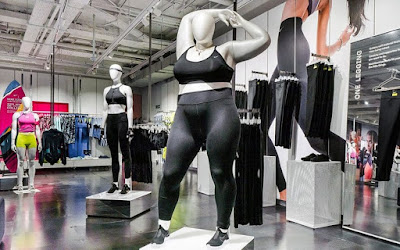 It's kinda hard to tell from the photo, but this mannequin looks a lot like me. I would judge her to be size 16-20. Size 16 is the national average for cis women.

You'd think Gold had never laid eyes on a fat person before. Does she really think someone of this size would be incapable of running? There might possibly be some concern about impact on the knees after a while, but that's true with runners in general. And, of course, how the fuck is anyone supposed to lose weight if they're not allowed to exercise???

Then there's this shit:

I would never want a woman to hate herself for what she finds in the looking-glass. But to have control over your body you must first know it; to be oblivious is not to be happy, unless you are a child.


"I don't want you fatties to hate yourselves. It's just that you're immense, heaving, unfit to be portrayed in any form, incapable of movement, about to die, and also you're oblivious children."

The unmitigated gall to declare that all fat people don't know their bodies, and that she knows their bodies better than the people who live in them. And then she has the fucking nerve to mention narcissism.

The fat-acceptance movement, which says that any weight is healthy if it is yours, is no friend to women, even if it does seem to have found a friend in Nike. It may, instead, kill them, and that is rather worse than feeling sad. Fat-acceptance is an artifice of denial – they are fat because they do not accept themselves – and a typically modern solution to a problem, if you are a narcissist. It says: there is no problem. Or if there is, it’s yours, not mine. As soothing as that may be to hear, your organs and your skeleton will not agree.


Neither acceptance nor denial is narcissism, Gold. Narcissists tend to be thin in today's society because for a narcissist, all that matters are appearances. Narcissists also tend to think they know better than anyone else and put others down to make themselves feel good. Narcissists create a false persona and wear it like a shell to protect themselves. They are the ones who strive every day to fit cultural beauty standards and often do, but they hate themselves anyway, and deny that fact by acting like they're amazing people whom everyone should worship.

Accepting themselves as they are despite society viewing them as flawed? Not in the narcissist's playbook, even if it was just an act.

And yeah, some people do eat just to feel any kind of positive sensation for a bit, and it's sad that for so many people, that's the only accessible source of pleasure. But that is the result of capitalism and advertising that tells you to hate yourself and never be satisfied with what you have. It's the stress of trying to survive while enduring the screams from judgmental fucks telling us we're not doing it right or good enough. I consider myself fat with a proud and capital F but I will die from stress, I guarantee you that. And Tanya Gold is stressing me the fuck out with her bullshit.

Also, of course, shame on the Telegraph for publishing this shit. Fat hatred kills. This kind of rhetoric is why we have eating disorders. Thanks a fucking lot.
Posted by Not Sorry Feminism at 3:09 PM