A lot of shit has happened already this week so I'm just getting to Stephen Moore and his op-ed about how women shouldn't be allowed to sports.

It's always amazing to be reminded that the dudes who were saying this same kind of shit online and then coming to my blog and my social accounts to call me a feminazi cunt for being like "um could men stop treating us like shit" were not actually losers in their parents' basements. They were the people making our laws and writing our op-eds in the National Review.

“Here’s the rule change I propose: No more women refs, no women announcers, no women beer venders, no women anything,” he wrote in a 2002 column for the conservative National Review, recently unearthed by CNN’s Andrew Kaczynski and Paul LeBlanc.

Moore, who now says he was joking, also suggested that female athletes should be paid less than men and mocked women’s political opinions (“sooo malleable”). 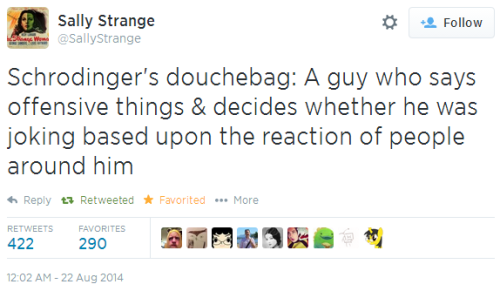 Also, and this is not a joke, the National Review is a conservative rag that just today published an article titled "‘Dehumanizing’ Speech Is Still Free Speech" on their website. And Moore wrote multiple articles for them in which he spouted his rank sexist beliefs.

But on Monday, Kaczynski and LeBlanc of CNN published excerpts from a series of National Review columns by Moore, written from 2001 to 2003, in which he complains about women doing a variety of things, such as playing sports, selling beer, and voting.

“This year they allowed a woman ref a men’s NCAA game,” Moore wrote in a 2002 column devoted to March Madness. “The NCAA has been touting this as example of how progressive they are. I see it as an obscenity. Is there no area in life where men can take vacation from women?”


If you hate women so much, why don't you fuck off to Pluto, where there are no women at all! No women to ruin your good times being a sexist shit bucket.

Now he's whining that the public is "pulling a Kavanaugh" against him, which is more appropriate than he knows. I would be shocked if Moore had never assaulted a woman. Men who hate women rarely stop at just hating them.

But also, who wants to bet that Moore has accused women of having a victim complex? LOL.

Anyway, I'm sure he'll be confirmed to the Federal Reserve Board because he was just saying out loud what most Republican men believe. But he'll be out on his ass before too long.
Posted by Not Sorry Feminism at 11:45 AM