Rep. Ilhan Omar, who has been in the news recently because a suggestion that she may have engaged in antisemitic tropes while criticizing Israel and the right fell all over themselves to be hypocritical assholes about it, is continuing to piss off white dudes and making me fall in love with her.

Most recently, she challenged Venezuela envoy Elliott Abrams, an old white guy who supported multiple U.S.-backed coups in Latin America in the 80s. Omar is already getting a reputation for saying things that others are afraid to say, whether it's about Israel or the fact that the U.S. has been backing violent right-wing coups to overthrow democratically elected leaders in South and Central America for decades. And for that, of course, I am becoming a huge fan. But what I want you to pay attention to today is Abrams' face when she shuts him down at this hearing.

Omar ends her admonishment of Abrams by saying "I fail to understand why members of this committee of the American people should find any testimony that you give today to be truthful." When Abrams says he would like to respond, Omar simple says, "It wasn't a question."

Abrams' pause followed by absolute indignation that not just a woman, not just a woman of color, but a Muslim, hijabi woman would tell him "no," publicly and decisively, is so delicious and filling it almost fills up the vast emptiness inside me where hope for the future used to be.


Tense exchange between Ilhan Omar and Venezuela envoy Elliott Abrams over his support for US-backed coups in the 80s.

"I fail to understand why members of this committee of the American people should find any testimony that you give today to be truthful." pic.twitter.com/BeprHzPkfy
— Kyle Griffin (@kylegriffin1) February 13, 2019


She talks over him. She says "I reserve the right to my time." Abrams is ready to throw an entire tantrum at this point.

And it just gets better. Abrams is so pissed off at this direct challenge by a hijabi woman that it takes Omar multiple times asking a question that should be the world's easiest "yes" for him to finally give in and answer.

If you can't watch the video, I took screenshots of my favorite moments.

Abrams's face the moment he realizes he's just been shut down by a Muslim hijabi woman: 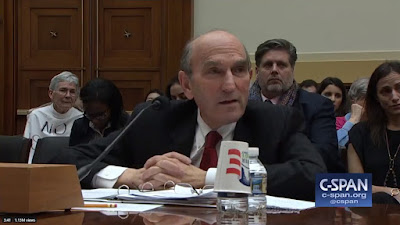 Abrams wagging his finger at her because he's outraged a woman is refusing to let him speak during her time when she didn't ask him a question: 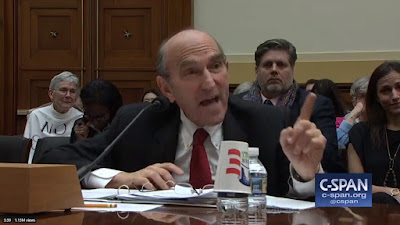 Abrams looking to the chairman for support like "how could you let this happen to me, a rich white man???" 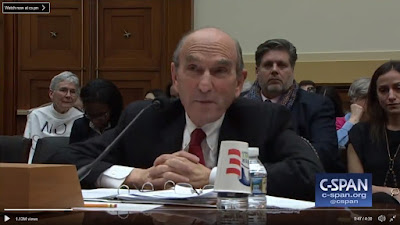 Abrams leaning back in his chair all mad after being repeatedly shut down by Omar and realizing that he can't trample over her like he probably does to his wife: 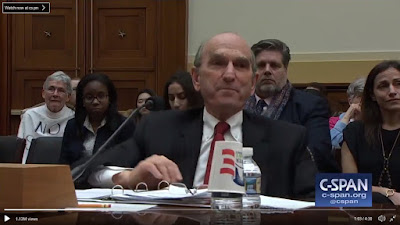 Abrams angrily poking the table while basically saying that a massacre of 800 people and the rape of 12-year-old girls by U.S. soldiers in El Salvador is a good thing because they have democracy now so everything's great! (Fact check: They don't and it's not). 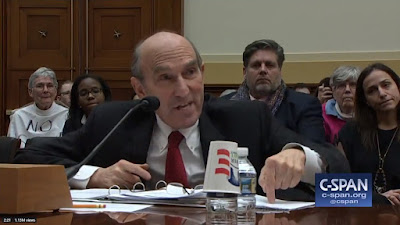 Omar's amazing condescending smile that she paused full seconds to give him to punctuate the fact that he didn't answer her question, so here is the question again with a "fuck you" smile because you are not getting off the hook with your cute little indignant white man tantrum and you will answer the question: 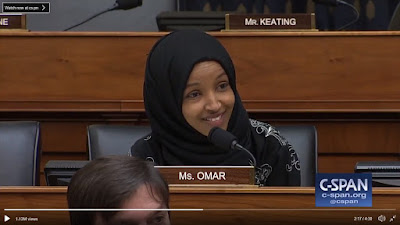 Abrams throwing up his hands and looking to the chairman again because how DARE he be made to answer a direct question that could make him look bad for supporting genocide: 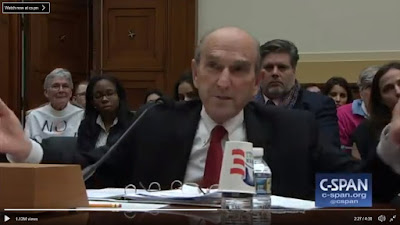 Abrams' look of defeat after finally answering the question/being forced to lie that preventing rather than supporting genocide and human rights violations is "always the position of the United States." 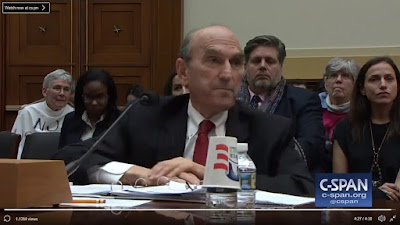 I might watch this video every night before I go to bed so that I can fall asleep with a smile on my face. Thank you so much, Ilhan Omar. I love you.

Posted by Not Sorry Feminism at 12:07 PM