Who Deserves to Live and Who Decides?

As I've expressed many times before, I have a hard time understanding at a gut level how people can be so callous and heartless when it comes to the poorest and most desperate human beings on this Earth. Over the break, I got into a Facebook comments argument with a woman who somehow found her way onto my blog's Facebook page. This woman was a straight up pro-Trump, pro-wall, anti-immigrant bigot. It's been a while since I've talked to one of these types, because it's generally a waste of time and bad for me. But you know me. Every now and again I let myself get sucked in because it makes me feel something again.

After the dust settled and the anger faded, I realized that the woman's entire argument originated with the "just world fallacy." Now, if you're like me, you get immediately annoyed at the sight of the word "fallacy" because asshole dudes who like to declare themselves paragons of logic ruined it. But this is an important term to know and understand. It's the fundamental belief that the world is just. Not that it should be, but that it already is. Therefore, if something bad happens to someone, they must have deserved it. It doesn't matter how awful a person's fate is. If it happened, they deserved it.

In our argument, I repeatedly stressed that the people fleeing to the U.S. via caravans or whatever are human beings and they deserve help. They don't deserve to die, they don't deserve to suffer horribly in abject poverty among intense gang violence, which is what would have happened if they had stayed in their home countries. I asked her again and again, why would they have left their homes and walked thousands of miles with little but the clothes on their backs unless they felt they had no other choice? She repeatedly declared that they made the wrong choices, and I asked her both A) how does she know what is the right choice for anyone else and B) even if it was a bad decision, do people deserve to suffer and die for that?


Predictably, she failed to answer.

That is because this woman is clinging to her belief that the world is just. She has to believe that the little children dying in ICE custody deserved it, or at least that it was the fault of the parents, who deserved to lose a child - one of the worst things a human being can experience.

Why do people believe in the just world fallacy? Because once you reject that fallacy, life gets hard. I know. I couldn't tell you how many times I've spiraled into a depression over pondering those classic questions. Why to bad things happen to good people? Why do so many people suffer? Why do people let them suffer when they have the means to end suffering? Does the human race even deserve to survive?

It's uncomfortable. It's depressing. It's terrifying. It's not fun.

But the alternative is worse. If you cling to the just world fallacy, you end up like Trump supporters. Rather than looking upon the poor and desperate with compassion, you look upon them with contempt. Because the just world fallacy says the poor deserve to be poor, and the desperate deserve to be desperate. They must have done something awful, so you don't have to feel bad for them. You can simply judge them guilty and condemn them to suffering and death.

It makes racism and nationalism real easy to accept. When confronted with the reality of what these people were fleeing, the woman I was arguing with reverted (predictably) to declaring that I was the bad person for "encouraging" people to flee to the U.S. when we can't even take care of our own. There are many reason why this is a shit argument, from the fact that we could take care of our own and many, many more simply with a portion of our bloated military budget and welfare given to big corporations to the fact that immigrants and refugees contribute more to the economy of the U.S. than the rich ever do. But consider how absurd it is to declare that certain people don't deserve help because they were born on the wrong side of an invisible line drawn in the sand. 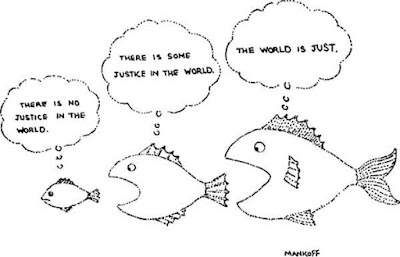 It all comes down to what people think other people deserve. I rejected the just world fallacy long ago and realized that we as a species have to create justice. That naturally led to the belief that everyone deserves the things they need to survive regardless of accidents of birth. It's difficult to live that way, because so many people don't have those things, and that means there is a serious lack of justice in the world. But I would never, ever go back.

I don't know what it takes to get people to drop the just world fallacy. Maybe something bad has to happen to them. Maybe that's why so many of the rich and privileged subscribe to this fallacy, because their wealth and privilege protect them from the needless suffering experienced by the rest of us. Then again, there are poor and marginalized people who also cling to this fallacy. Maybe they just can't handle the idea that there is no inherent justice in the world. Maybe those people have been told again and again that they deserve their suffering until they bought it. Maybe that's why so many people give up. What's the point of trying to make your life better if you've already been judged to be deserving of suffering?

It's a difficult thing to face. If we don't all face it soon, the human species may soon go extinct. It's up to you.
Posted by Not Sorry Feminism at 1:04 PM