After a two and a half week break, things are more on fire in the White House and in this country than ever. Figuratively. It's winter so at least the wildfires have stopped for now. The point is it's even more difficult to pick a thing to blog about. I'm also writing daily about Trump, his supporters, or other Republicans being shitheads, so I'm even more aware of what's going on.

Yesterday's cabinet meeting alone was just a three-hour clusterfuck of weirdness and lies. The horse is all over the hospital.

Anyway, instead of yelling about everything being on fire, I thought I'd share some of the things I read over the break that are really helpful/awesome.

How we can resist the deportations of Khmer Americans

This is local to the Seattle area, but there are probably many similar guides out there. See if you can find one that applies to the vulnerable populations in your area.

Saying Goodbye to 2018’s Seesaw of Outrage and Numbness

THANK YOU to Deepa Iyer for writing this sorely needed guide. I'm going to try and stop getting so overwhelmed by the negative and focus on what I can do. I see myself as mostly a storyteller but willing to be a disrupter when it's needed.

It Is Expensive to Be Poor

Something I was already very aware of, but a great one to post everywhere, maybe print out and leave on your boss's desk.

I've been seeing a lot of anti-dieting articles and I'm super happy about it, but let's not forget who we should listen to on the subject of weight.

It’s OK To Use “They” To Describe One Person: Here’s Why

This is by Dictionary.com. I fucking love the word-keepers of today. They're doing awesome shit.

I know it's clickbait but it's a wonderfully uplifting story that just keeps getting better.

That's everything I could find in my bookmarks and recent social media posts. Bonus, here is the best image of 2018: 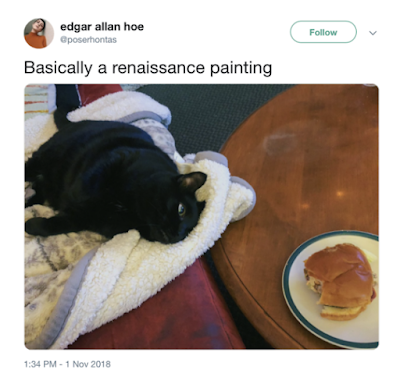 Someone pAINT IT.
Posted by Not Sorry Feminism at 10:48 AM