I Want Everyone to Be Happy and Secure

Yesterday, I woke up to the news that my main freelance client, the company from which I was getting the bulk of my income, is "tightening" its budget and they will therefore not "need" any freelance writers anymore. Yes, that is why there was no blog post yesterday.

Also yesterday, I came upon a simple image on Tumblr: 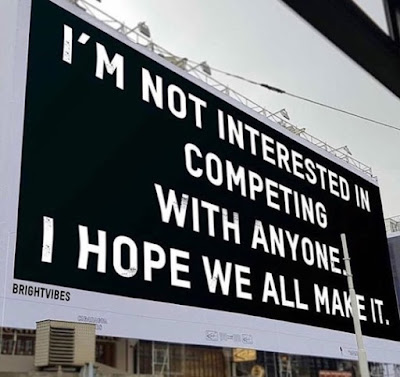 In our late-stage capitalist society, being "competitive" is seen as a good thing. It's held up as an ideal. Not being competitive is seen as odd at best, and more often viewed as a weakness, a flaw of character, laziness, etc. I would never admit to being non-competitive in a job interview, because I know it would be counted against me. But the truth is that I am not usually competitive. I don't care about "winning" or generally being better than anyone unless I have something to prove, like when I'm playing video games with dudes and feel that annoying pressure to prove that women can be good at the video games.

This has been true for my entire life. I never liked the pressure of competing and preferred things to be casual. I played soccer for 10 years as a kid, and I was pretty good. But once you get to a certain age, I was told, you basically either have to go into a competitive league or fuck off, because recreational leagues are for little kids. The competitive nature of "club" soccer squeezed out any pleasure I got from the game. I couldn't enjoy playing know that if my team lost, I'd get yelled at by some spindly little shit with an inferiority complex from his unfulfilled sports star dreams.

Now faced once again with the prospect of looking for work, I'm reminded of the absurdity of "club sports" for children. Only instead of being on a team, I'm on my own, battling in a free-for-all against dozens, maybe hundreds of other applicants every time I apply for work, and what is at stake is my ability to afford rent and food.

I hate feeling like I have to be dishonest about myself in order to survive. Very few people out there actually want to hire a cynical, non-competitive commie who is, in fact, much more of a follower than a leader and has no interest in "managing" others because the very idea of being anyone's "boss" is fucking bizarre and a little gross. I also really hate feeling like a stray dog fighting other dogs for scraps. I especially hate knowing that for every job I get, many other people, some of whom are much more desperate than I am, didn't get it and have to continue being desperate.

I don't want to be a part of this barbaric society in which the poor are forced to fight each other for the limited resources made available to us because the few rich people are hoarding literally half of all the planet's resources for themselves, leaving not enough for the rest of us. I want a society where everyone gets what they need to be safe and healthy and happy. Everyone. Not just those of us who are privileged, lucky, and/or ruthless enough to grab the scraps for ourselves while others go hungry. I want everyone to be able to pursue happiness and fulfillment freely, without being constantly hounded by the possibility of homelessness, starvation, and bad credit.

I don't want up to have to "make it." I want everybody to be taken care of. One person going hungry because they don't have enough money for food is unacceptable. That's why I hate capitalism. Because capitalism demands that some people struggle, suffer, and starve. And that "some" will eventually become "most."

I still don't actually know if I'm a communist or an anarcho-communist or an anarchist or what, because I'm still not educated enough. But I've lived capitalism, and that's enough to make me anti-capitalist. And you can shout numbers of people killed by so-called communist leaders at me, but capitalism by its nature kills millions yearly. At least communism, by design, is supposed to take care of people. Yes, men have taken advantage of situations in which communist nations arise to grab power and then turn out to be massive assholes who don't care if poor people die and will kill to keep themselves in power, but THAT IS THE EXACT SITUATION WE HAVE NOW. That is our capitalist society right now. But instead of people being like "this is not how it's supposed to be" people are like "well that's just how the world works." No, that's how capitalism works. And I refuse to accept that.
Posted by Not Sorry Feminism at 1:05 PM