And They Call Us Snowflakes

The mass mailing of pipe bombs to Democrat politicians and also Robert DiNero for some reason is uhhhhhhhh fuckin' wild, yeah? I don't know what the perpetrator hoped to get out of it other than mass sympathy for Democrats, even if any of their bombs had worked. But right-wing terrorists will be right-wing terrorists, I guess.

Meanwhile, you've got Republican pundits everywhere calling this a false flag operation. I'm not just talking about Alex Jones. This is what I mean when I talk about post-reality America. Something happens that's politically inconvenient to you? Just deny it. Say they did it to themselves. Democrats couldn't pull off an election against the literally worst human being alive but sure, they orchestrated a fake mass bombing campaign against themselves.

Republicans don't care about reality, about fairness, about morality, about basic human decency, none of it. All they care about is their own power and they will do and say anything to get it. Playing by the rules of reality wasn't working for them anymore so they're skewing reality, gaslighting, and fucking with people's heads 24/7. Anything bad that comes out of it can be dismissed via victim blaming and they can just keep on their merry way. They don't care who dies in the process as long as it's not them or someone who can give them power.

Nothing is sacred. They have no souls.

Thankfully, there are many people out there who are not like them and who are working to bring joy to their fellow human beings every single day. Like whoever did this: 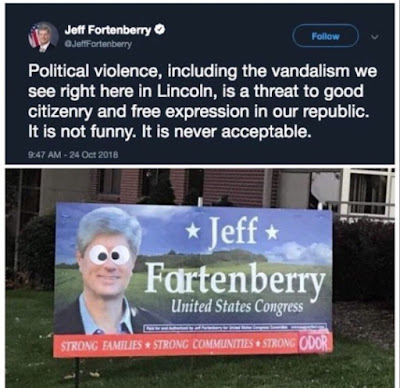 I don't care who you are, that's funny. Fartenberry.

What is even funnier, in the most awful way possible, is that Jeff tweeted that yesterday. The same day that news about all the fucking pipe bombs was breaking. He's seriously trying to say that someone putting googly eyes on his political signs and changing his name to Fartenberry is "political violence" on the same level as attempted murder.

And they call us snowflakes.


Clearly that vandalism is a false flag operation. I think you put those googly eyes on your own posters to get attention.
— Lindsey Weedston (@LindseyWeedston) October 25, 2018

Posted by Not Sorry Feminism at 11:43 AM

Email ThisBlogThis!Share to TwitterShare to FacebookShare to Pinterest
Labels: bombing, domestic terrorism, gaslighting, hypocrisy, talk about your special snowflakes, victim blaming, what happened to your soul