If you're in Tacoma or Portland this weekend, be on the lookout for the so-called "Proud Boys" looking to cause violence.

One of these fascist thugs was encouraging his fellows to show up at the NWDC resistance/occupy camp, saying "we're coming for you." 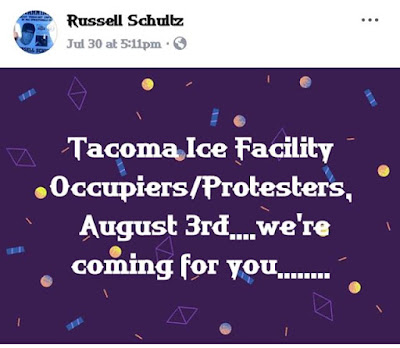 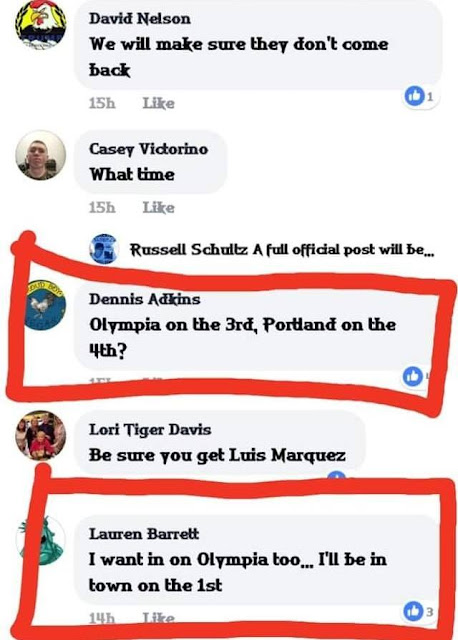 It's possible that this will not happen because this Russell clown commented on his own most recent post threatening this specific violence claiming that the camp was cleared out by police. It hasn't, but hopefully he's using that as an excuse because local antifa caught wind of his little plan (because he posts everything on his public Facebook account like a doofus) and spread the word to come out to defend it. Some of these vessels of pure toxic masculinity might still show up and be in the area, however. Be careful.

On Saturday, they will be in Portland to doxx and likely attack protesters at the anti-Patriot Prayer rally. They plan to use cameras to photo/video faces, so plan to cover up your face or kick out anyone doing this - particularly white men. They claim they'll be recording "criminal activity" but we all know it's actually for doxxing. And the only criminal activity they're likely to find is that which they start themselves, because that's what they do. 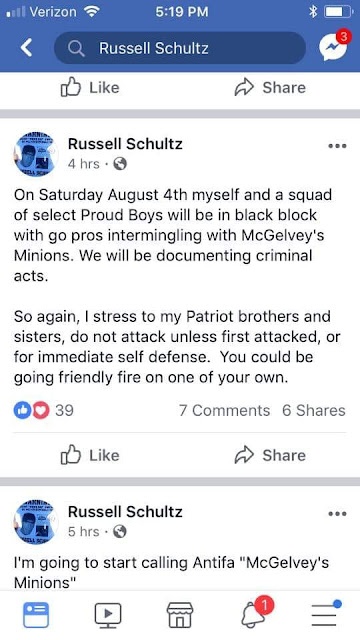 It's generally a good idea not to take photos at rallies like this unless you're clearly avoiding catching faces. If you do get a face, blur it out before you post it. People's identities must be protected from both the police and fascists like the Proud Boys.

This is also just a general reminder that these self-described "Western chauvinists" are a bunch of violent thugs roaming around trying to start shit in a desperate attempt to convince themselves that their warped idea of masculinity makes up for the utter, endless empty void inside them that they might have to actually look into if they ever stopped swinging their dicks around for even a second.

It's also a little hilarious (and a little sad) that this Russell nerd thinks himself the hero in this little story he's concocted for himself.

Ah yes, because the rich, powerful, and privileged and those doing their dirty work are ALWAYS the good guys in all the best, most beloved stories.
Posted by Not Sorry Feminism at 10:30 AM