Also could be another "Here's Fascism!"

By the way, I made a special new reaction image to go along with that particular post series: 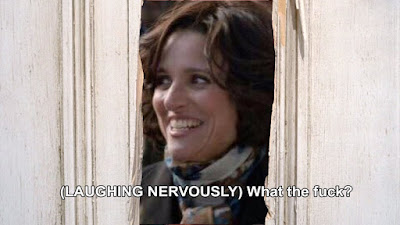 Get it? Haaaaaahahaha it's terrible.

Anyway, back to the bill. Apparently, just over a month ago, some mess called the "Unmasking Antifa Act of 2018" was introduced by  Rep. Donovan, Daniel M., Jr. [R-NY-11].

"To amend title 18, United States Code, to provide penalty enhancements for committing certain offenses while in disguise, and for other purposes."

If you didn't know, dedicated anti-fascists often cover their faces in protest to avoid harassment by fascists, both of the police and non-police variety, and the state in general. We've all seen how cops and often local governments side with fascists and arrest, brutalize, and do everything they can to prosecute and imprison the heroes who try to defend communities against fascists. Covering their faces protects them in this age of video. It's essential for dedicated antifa to exist.

Making this a crime is a transparent attempt to wipe out anti-fascist efforts and allow fascist thugs to overrun our communities and harass, bully, assault, and murder marginalized peoples and their allies into hiding and, ideally (from their perspective), non-existence.

"Whoever, whether or not acting under color of law, while in disguise, including while wearing a mask, injures, oppresses, threatens, or intimidates any person in any State, Territory, Commonwealth, Possession, or District in the free exercise or enjoyment of any right or privilege secured to him by the Constitution or laws of the United States, or because of his having so exercised the same, shall be fined under this title, imprisoned not more than 15 years, or both."


Defend yourself against a fascist thug in a mask and you can get 15 years in prison. That's what this does. Hell, "oppresses, threatens, or intimidates" can be interpreted widely, god knows how far they'll take it. Can you even yell "fuck of, nazi" in a mask at a shithead with a tiki torch without being thrown in prison for 15 years?

This is still in committee and I hope it gets nowhere, but the fact that it exists at all is alarming. I'll be checking up on it periodically. Be prepared to fight it.
Posted by Not Sorry Feminism at 11:13 AM