He Is a Member of a Violent White Supremacist Group. So Why Is He Working for a Defense Contractor With a Security Clearance?

There likely isn’t such a thing as a “typical” violent white extremist in America in 2018. Still, Michael Miselis — a University of California, Los Angeles doctoral student with a U.S. government security clearance to work on sensitive research for a prominent defense contractor — makes for a pretty unusual case.


Actually, it's not really a good question. In that the answer is pretty obvious.

And this guy is a perfect example.

In video shot in Charlottesville, a bearded, husky man is seen in a red Make America Great Again hat with his hands wrapped in tape that came in handy for the brawling that occurred that day. During one encounter, the unidentified man in the red hat pushed an African-American protester to the ground and began pounding on him, video of the episode shows; moments later, a known RAM member choked and bloodied a pair of female counterprotesters. The possible RAM member also had turned up in video shot during hours of combat at a Trump rally in Berkeley, as well. Wearing protective goggles to ward off pepper spray, the man fought alongside RAM members, wrestling one protester to the ground and punching others.


He must feel like a big man, beating up women and black men in defense of the powerful.

I'll be shocked if this Michael Miselis loses his clearance after being exposed. Sounds like both he and his company are ignoring the whole thing, hoping it will go away. But the rest of us can memorize his name and face and ostracize him. Here's a nice shot of the piece of shit: 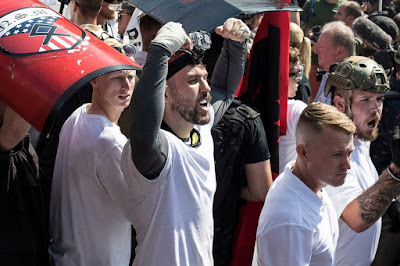 That's America for you. Fucking coward.
Posted by Not Sorry Feminism at 3:00 PM