Conservative Goes to Progressive Rally, Made Uncomfortable By the Idea That Living is a Right 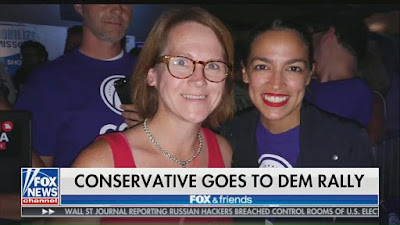 There is so much about this that is hilarious and also mind-blowing. It's a trip from start to finish.

This ‘Fox & Friends’ segment about Alexandria Ocasio-Cortez is beyond parody

So a conservative white woman went to an Ocasio-Cortez rally and that was so incredible that it landed her a spot on Fox & Friends. Is this the first time a conservative has ever actually gone out and listened to progressive ideas? Because they're constantly telling us that we need to listen to their racism and bootlicking. So.

Also, when we go to Trump rallies, whether to protest or just to be there for whatever reason, we get assaulted and thrown out. By Trump's demand and under his encouragement. So.

I've been to a couple far-right rallies. To protest the fact that they're full of actual nazis who are always attacking people during and after their rallies. So.

But let's start unpacking the shit that this lady said on Fox & Friends. Brace yourself.

Kruta told hosts that both Ocasio-Cortez and the Democratic candidate for whom she was stumping, Cori Bush, “talk about things that everybody wants, especially if you’re a parent — they talk about education for your kids, health care for your kids. Things that you want.”

“If you’re not really paying attention to how they’re going to pay for it, or the rest of that, it’s easy to fall into that trap and say, ‘my kids deserve this, and maybe the government should be responsible for helping me with that,'” she added.


Oh my god. Progressives think that CHILDREN. DESERVE. shit like HEALTH CARE. and EDUCATION?? WHAT THE FUUUUUUUUUUU

Question. What exactly do conservatives think the government is for? Besides bombing the children of people from other countries, I mean.

I guess if you can't pay for it, this woman thinks that children deserve to die in ignorance and filth from treatable and preventable diseases?

And the idea that they DON'T deserve such a horrible fate made her deeply uncomfortable.

Kruta also wrote a Daily Caller piece about her experience in which she characterized the Ocasio-Cortez/Bush rally as “truly terrifying,” because “I saw just how easy it would be, were I less involved and less certain of our nation’s founding and its history, to fall for the populist lines they were shouting from that stage.”

She went on to mention three scary things in particular.

— I saw how easy it would be, as a parent, to accept the idea that my children deserve healthcare and education.

— I saw how easy it would be, as someone who has struggled to make ends meet, to accept the idea that a “living wage” was a human right.

— Above all, I saw how easy it would be to accept the notion that it was the government’s job to make sure that those things were provided.


Again, to be clear. The government's job is to take care of its people. It was always supposed to be "for the people." Somehow, conservatives have been led to believe that this means "murdering people outside of our borders and giving lots of money to the rich."

I also love this:

Kruta replied by saying she “was mostly uncomfortable, because I was surrounded by a group of people who were talking about how they had gotten involved because they were tired of being angry all the time. It seems like so much effort to be angry about everything, instead of to focus on what you could do to change it.”


Yeah, because conservative white women don't have any anger at anything.

‘Rapist!’ she yelled at a Hispanic man. ‘She’s quoting the president,’ he thought.

Police say woman screamed racial slurs and smacked a black teen at a pool. She lost her job. 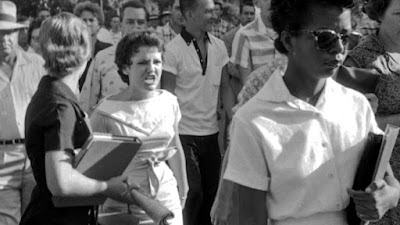 Here's the difference. Progressives are angry at the injustice in the world leading to widespread suffering and preventable death, and general oppression of the powerless by the powerful. Conservatives are angry that people of color exist.

Maybe your discomfort and terror is actually coming from the cognitive dissonance created by being a human being with kids who would lose your mind if someone tried to deny them healthcare or education and trying to believe that kids don't deserve health care and education for some reason.

And if you're smart enough to write an article, I'm confident that you can figure out that there is always money to pay for that. The U.S. government has a shit ton of money. They just decide to spend it on other things, like, say, a bloated military budget that is bigger than the next ten biggest military budgets combined.

Maybe that fear comes from the scary idea that everything you've been told and therefore believed your entire life is... actually.... fucking wrong.

It's okay to admit when you've been wrong, you know. Just saying.
Posted by Not Sorry Feminism at 11:45 AM