So news came out yesterday that, during a trip to visit the child prison camps on the border, she wore a jacket that literally said she doesn't care. Literally. Fucking. Literally. 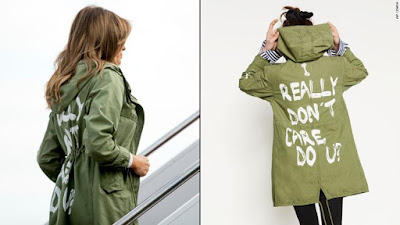 Melania is really giving me mixed feelings. I'm not sure how much free will she had when it came to marrying Trump, like did she really have a say in it or? And I'm 10,000% sure that Trump abuses her in some fashion, being the absolute piece of shit he is. But then, she's also a racist fuck, and now this.

It does not matter one tiny bit if she "meant" to send a message by wearing the jacket. She did anyway. And at best, that message is "I don't care about other people's suffering enough to spare a moment of thought to whether I should wear a jacket that says I don't care to a prison camp full of babies."

But also, she's a fashion model with her own fashion lines. I have a hard time believing that she just threw that on without thinking about it, as bad as that already is. Callous asshole.

Also, earlier yesterday, I came across this headline:

Worst. Presidential couple. EVER.
Posted by Not Sorry Feminism at 10:30 AM