You might have heard that the Seattle City Council repealed the corporate head tax they previously unanimously implemented in order to raise money for affordable housing and supporting homeless people. Well, they implemented a watered-down version that would have raised a lot less money for the homeless than was initially planned, but it was something. Then Amazon threatened to take their ball and go home, and some bootlickers made a ruckus, and they folded like laundry.

I fucking hate Amazon. I hate Bezos. He has such an obscene amount of money but he won't put a dime of it back into supporting the people who have become homeless because of Amazon.

People say that Amazon has helped Seattle, but I've lived in the Seattle area my entire life and here is what has happened. Rent and house prices have skyrocketed so that after working hard for several years, I still can't even come close to affording a two-bedroom apartment, let alone save up for a house. At this point I have given up hope of ever having either unless I move far away. My rent goes up every year.

Traffic has become monumentally worse. There is no such thing as a clear 405 anymore unless it's in the dead of night, and then only if they aren't doing yet more construction. This means shelling out more for gas. Public transit improvements and bike lanes are only made to benefit Amazon and other big tech company employees.

As for jobs, for the most part they're all garbage contract jobs if you happen to have the right skills. Otherwise you can feel free to work in one of Amazon's horrific warehouse hellholes and die. Oh also a contract tech/office job at Amazon will make you want to jump off the roof.

I'm still having people try to tell me that Amazon has improved the city. For who, you rich fuck? Not for me. Not for the many thousands who have become homeless here since the rise of Amazon.

Jeff Bezos has not helped the city. He has conducted a hostile takeover of the city and holds it hostage. People who call this "growing pains" have never felt hunger pains. Seattle might as well change its name to Amazon City and discard all pretense of freedom or progressive values. The only taxes they'll actually pass are on the poor, who don't have the power to fight back, and the revenue isn't enough to do anything to help the poor - after they've spent it all on helping the rich.

Meanwhile the rich, their bootlickers, and people with Amazon Brand Stockholm Syndrome (TM) will continue to spout any bullshit excuse they can pull out of the deepest depths of their asses to ensure that nothing is done to help the homeless, because in reality they just want them to die. Or at the very least, go away somehow. I've seen people declare that they should be forced onto a bus and driven to Idaho, where I guess Idaho residents can treat them like shit and also they can die in the Idaho winter cold. 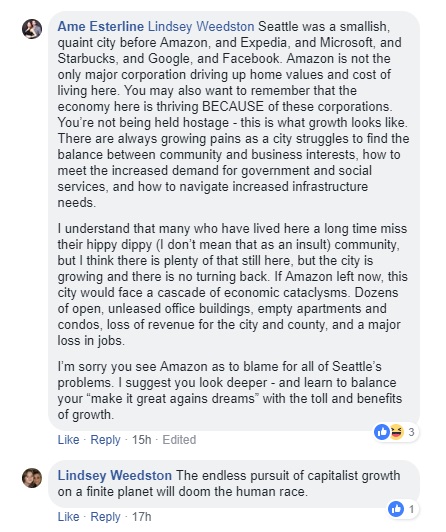 This is who Seattle belongs to now. People who have benefited from the corporate takeover because they were well off to begin with and have no contact with the poor. Those who fret over empty apartment buildings when we have so many homeless people. Hey Ame! You can put homeless people in those apartments! But not as long as they're occupied by tech bros who flocked here from out of state to drive up housing costs and commit homophobic hate crimes.

By "hippie dippy," what Ame means is pre-gentrified, without a huge and growing homeless population, with a much smaller wealth gap. But instead of taking time to think for a second she compares me to fucking Donald Trump. Classy.

Seattle is neoliberalism central and I fucking hate it. I hope to god I get the chance to participate in burning down Amazon buildings, along with Google headquarters and Microsoft.
Posted by Not Sorry Feminism at 1:59 PM