ICE is Evil and So is This Country

Let's talk about the kids coming to the border between Mexico and the U.S., shall we?

First, let's address the kids who have been "lost" by immigration officials. A lawyer made a Twitter thread yesterday with some very important information that we should all understand about this particular issue.


Now that we’re all on twitter because of this game, I am making a public service announcement: PLEASE STOP SHARING THAT STORY ABOUT 1500 KIDS MISSING. The outrage I’ve seen is a result of a total misinterpretation and could SERIOUSLY threaten the children you want to save.
— josie duffy rice (@jduffyrice) May 28, 2018


Go ahead and click through to read the entire thread, but the short version is that these 1,500 kids are not so much "missing" as they are "the kids whose guardians did not answer the phone when a division of HHS called to check up on them after they were placed with a family."

These are the kids who arrived without a guardian, NOT the kids who are being separated from their parents at the border. They're usually placed with family and then the "Office of Refugee Resettlement" makes a call later to check up on the kids, and if they can't get on the phone with someone, they're labeled as something that could maybe be interpreted as "missing" but they are very likely not.

Ms. Rice's other point is that it's good that these kids are out of the ORR's reach because the ORR is now working directly with ICE. We don't want ANY government office to be in contact with these kids right now. We want them to be "missing" according to ICE. Hide these kids from the U.S. government.

Now let's talk about the kids who are being separated from their parents at the border as a "deterrent" to people coming to the U.S. to seek asylum or just immigrate very likely because the situation in their home country is intolerable but not something that our shit government would grant them asylum for.

It is evil to turn these people away. It is more evil to take their kids away from them and stick these kids in cages to be guarded by people who beat and sexually abuse them.

The things detailed in that report are utterly horrific. Like I'm considering whether I can call myself a good person if I don't genuinely work toward moving down South to the border so I can help smuggled people in past ICE and friends and actively impede ICE at every opportunity.

Our government is of course denying these "allegations," and at the same time they're literally like "we're just going to go ahead and destroy our records of immigrant abuse including sexual abuse lol."

ICE Plans to Start Destroying Records of Immigrant Abuse, Including Sexual Assault and Deaths in Custody

ICE has asked for permission to begin routinely destroying 11 kinds of records, including those related to sexual assaults, solitary confinement and even deaths of people in its custody. Other records subject to destruction include alternatives to detention programs, regular detention monitoring reports, logs about the people detained in ICE facilities, and communications from the public reporting detention abuses. ICE proposed various timelines for the destruction of these records ranging from 20 years for sexual assault and death records to three years for reports about solitary confinement.


If you think ICE won't get that permission because what the FUCK, well, I wish I had your kind of sunny outlook on the state of the nation.

If you need a photo to go with all of this horrific information to get it all to sink in, this is how we treated migrant children in our custody in 2014: 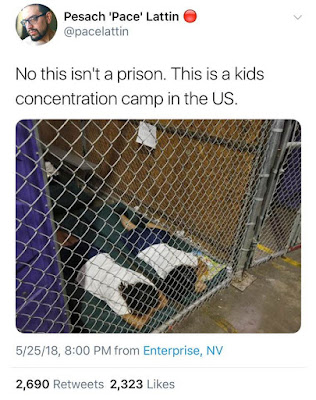 I'm going to go ahead and guess that this hasn't gotten better. Also, sending kids to "foster homes or whatever" is not an okay thing to do to the kids we take away from their parents. Like what the fuck, you're just going to permanently separate families to punish them for seeking asylum? And yes, our foster system is shit and also rife with abuse, so.

I also need to be clear about the fact that none of this is "un-American." We have been separating children from their parents to terrorize people of color and drive them to despair throughout our history. Starting with Native Americans, whose tribes we systematically wiped out in part by stealing their children, forcing them into horribly abusive "schools" designed to utterly cut those kids off from their culture and generally brainwash them.

Then, of course, you have the chattel slavery that routinely separated families in order to sow despair and obedience in African slaves.

Now we are doing it again with migrant, overwhelmingly Lantix families, sticking both adults and children into what can only be called concentration camps and justifying it by dehumanizing them via calling them "illegal," something that Nazis in Nazi Germany literally did to Jewish people, which is where/when the term "no human being is illegal" originated.

And still I see people online claiming that these PEOPLE, these HUMAN BEINGS deserve this unconscionable treatment because they did something that may or may not have been declared illegal by our government. As though that would mean anything to any parent trying desperately to get their children to somewhere safer, or somewhere they believe to be safer. Many of the people coming here now are seeking asylum, which is legal, but I don't give half a fuck if it's "legal" or not.

If you have kids, and you can't for a second put yourself in the place of a parent who lives in a nation plagued with war and/or horrific gang violence and/or intense poverty, and you still think they should stay and watch their kids starve/be murdered because coming to the U.S. without waiting 10 years and spending money they don't have to "legally" get a pass to come here is "illegal," you're a terrible person. You're evil. You're racist. And if humanity makes it long enough for this era to become history, then history will condemn you as accomplices to another evil regime that murdered countless people.

Posted by Not Sorry Feminism at 12:09 PM