So This Isn't All Over The News Today? Um?

So I'm out yesterday getting drunk for an article I'm doing (yes that is a real story) and I come upon this shit on Facebook: 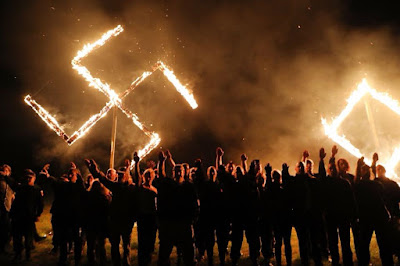 This happened after a neo-nazi rally in Georgia on Saturday. Something I had heard nothing about.

I guess news outlets are covering this, at least I found articles when I googled "neo nazi rally Georgia," but it's not on Facebook's trending news thing, and I'm not even seeing shit about it on Tumblr? Apparently only a handful of actual white supremacists showed up to the actual rally which may be why I didn't hear about it, but that image is fucking chilling. I mean, they had to gather some serious materials to make that happen. And any number of nazis fills me with rage.

Here we have militatized police, pointing their big ass guns directly at anti-nazi protesters. The counter-protesters who came to protest white supremacy and nazism. Did the cops point their guns at the nazis? No? They never do.

This is the most ass backward country there ever was.
Posted by Not Sorry Feminism at 11:10 AM