Have You Been Keeping Up With Anti-Black Racism News?

Boy howdy I bet you're excited to learn about the latest in fucked up police brutality and general anti-blackness throughout the U.S. and larger world, huh?

Honestly, I still come across so many people who think that police brutality cases are rare or the result of a few bad eggs or apples or whatever kind of food you want to chuck at the reality banging on your fucking chamber door. But listen. While I was working on that campaign to change police brutality laws in the state of Washington, which passed already, by the way, yay now we're only as terrible as the rest of the country, I followed a bunch of Facebook pages dedicated to documenting cases of police brutality. And I can't bring myself to unfollow any of them now, although I find myself with a rough case of "fuck there's so much I can't even deal with it."

I literally see new cases of horrific police brutality or general fucked-up-ness every goddamn day. Every day. This happens every day. And you don't need me to say it to you. The statistics are out there. Almost four people are killed by cops every day. Every fucking day. And you still want to believe that it's not that big of a deal?

Stephon Clark. Shot 20 times by police for holding a cell phone in his grandma's backyard while police were out searching for a non-descript black man. They said he was approaching him but entry wounds were found in his back. During protests against this bullshit, a police officer accelerated in his car to mow down a protester.

Meanwhile, a white lesbian couple appears to have likely deliberately driven their SUV off a cliff while driving with three of their black adopted kids. The other three kids are missing and likely dead. It's now coming out that child protection services were called on these women for possible abuse and failing to feed the kids. The children included the boy in that one photo where he hugged a cop while crying. 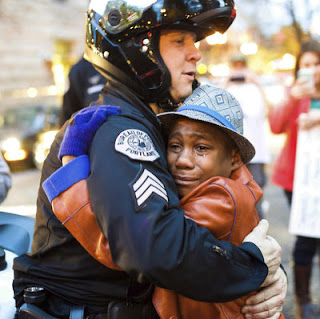 I think I speak for everyone when I say what the FUCK HAPPENED?????

Did you know that the staff stole a million dollars from Howard University, an HBCU, and the students have now taken over the administration building to try and get it back? The fuck?

50 years ago today, Dr. Martin Luther King, Jr. was assassinated by the U.S. government on his balcony for daring to speak out against U.S. imperialism and the Vietnam War. Today, we are still fighting anti-blackness at every step, on every level.

Racism will end or humanity will die.
Posted by Not Sorry Feminism at 12:14 PM