Transphobia in the 2018 Women's March

We keep saying that it's time to get the transphobia out of feminism. But it was in full force on Saturday.

The verbal attacks against Peek started last Saturday after she posted a statement on the women's march Facebook page expressing her concerns about inclusivity, particularly for Black, Indigenous and/or queer people.

Over the next 18 hours, the post garnered more than 500 comments. The back-and-forth exchanges on the post saw many people targeting Peek’s gender with hateful comments.

"I made a post on the women's march page and instantly got attacked," she said.


There are examples of the abusive comments at the link, where cis feminists misgender her and make generally transmisogynistic comments. And Peek had every reason to fear being attacked at the actual march. 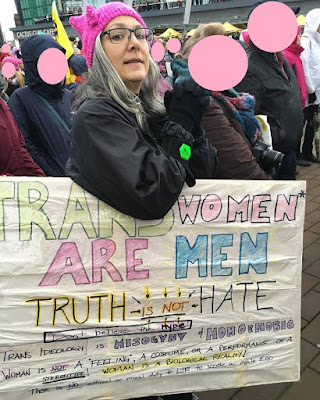 Going to a women's march to attack women. But sure, trans women are the misogynists.

This isn't okay. And it's not okay that all those people around her let her carry that sign next to them unchallenged. In fact, it makes me second guess my decision to block out their faces. But you can find this image online unedited.

TERFs: Being a woman is not a performance of a stereotype!

Also TERFs: How can you call yourself a woman when you don't even dress like one???

Not to mention not "looking like a woman" by wearing makeup and "dressing feminine," etc., is used as an excuse to deprive trans women of hormone therapy.

I didn't go to the women's march this year. Protesting feels pointless these days. But maybe I should have gone so that I could look out for TERF shit, or maybe passed out fliers to people with pussy hats about transmisogyny. I hate that this is such a problem in feminism. We really must stop tolerating it.
Posted by Not Sorry Feminism at 1:21 PM