It's important that you read this Twitter thread because holy shit, everything's making so much more sense now.

I found it on a Tumblr blog called gay-and-grumpy and it's all about why people are putting up with such evil shit from the GOP. The short answer is that they don't believe the straight facts that are presented to them because they just can't believe one side of the U.S. political spectrum could be that evil.

This is just the start of it: 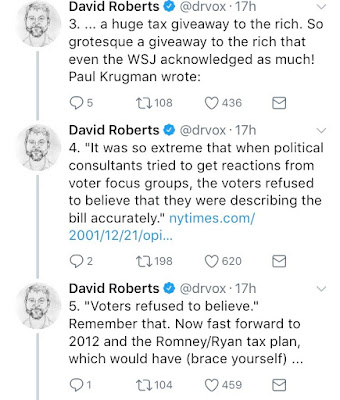 I encourage you to go to the Tumblr blog and read the entire thing. Click on the individual screenshots to enlarge them. Or you can go to David Roberts' Twitter page and dig up the thread there. Either way, just read all of it, and then consider how the fuck we're going to fix this. How do we make people believe that cartoon-level evil villainy has become real?
Posted by Not Sorry Feminism at 3:40 PM