Okay this is one of the best things I've seen in a long time.

In a video circulating online, some douchfuck giving a speech actually titled "It's Okay to Be White" at the University of Connecticut got into an argument with some guy at his douchey podium, and while they're going at it, a young woman can be seen taking a piece of paper from the podium and trying to covertly walk away.

Unfortunately (or not), Douchfuck McNazi notices and pursues her, then grabs her backpack and starts scuffling with her in what probably looked to the cops like a completely unwarranted attack. Not that it was warranted, because if you want to be seen as a non-violent fascist (even though that's not a thing), you can't respond to a bit of petty theft with assault.

Because that'll get your ass arrested. 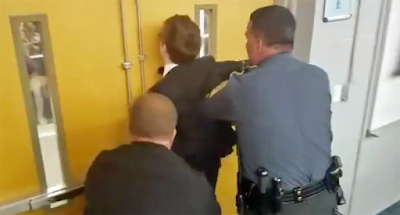 Side note: Lucian is one of the douchiest names I've ever heard.

Anyway this young woman is my hero:


BREAKING: @lucianwintrich appears to attack a @UCONN student during speech after she took something off podium. pic.twitter.com/WAcNYAak7c
— Kevin Galliford (@KallMeKG) November 29, 2017


You got a white supremacist arrested! I'm several years out of college and I haven't accomplished anything close to that awesome. I'd like to buy her a drink. If she's not under age.

Here's the video of the fascist nerd getting arrested:


Not all cops will protect you, fascists.