University of Pennsylvania is Siding With Nazis for Racism

UPDATE: This post originally stated that the university in question was Penn State, but it is in fact the University of Pennsylvania.

I was gonna say against anti-racism but that's a double negative.

Apparently, a professor at the University of Pennsylvania attempted to implement a progressive system in their classroom to try and combat racial bias. It's simply a system that allows people of color and other individuals from marginalized groups to speak first in order to make sure that all perspectives are heard. Many, many classrooms are heavily dominated by white, cishet, able-bodied and neurotypical people (and some by men), and instructors that aren't careful can end up having an entire class where only a very privileged perspective is heard.

It's really not a big deal. It's not that privileged people aren't allowed to speak. They just have to wait, and one of the able-bodied, neurotypical, cishet white dudes might not get to repeat the same thing just said by one of his less privileged counterparts in a more rambling and unnecessarily flowery fashion and somehow take credit for the idea. I went to college. I've seen it happen. Again and again.

So, very unfortunately for this professor, Twitter nazis noticed her tweeting about this and have targeted them for one of their hate campaigns. The nazis, of course, openly planned their strategy to flood the university with messages accusing them of being racist, so the professor documented this and delivered it to the college administration. They said they'd back them, but guess what? 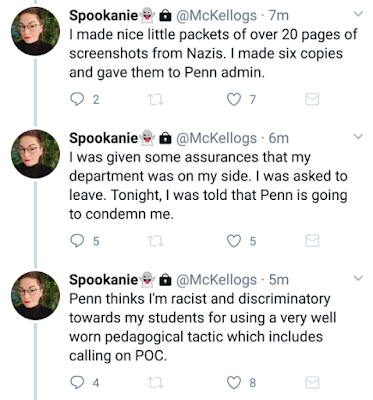 Her account is protected now but she's asking people to help her.

Someone made a convenient Pastebin thing allowing anyone to email these individuals with a message urging them to, you know, not do exactly what NAZIS want them to do and to instead let this professor implement basic privilege-countering techniques into their classroom. The fact that this university is literally siding with a doxxing, harassing, stalking, death-threatening hate mob of fucking nazis is beyond disgusting. The fuck is wrong with them.
Posted by Not Sorry Feminism at 1:00 PM