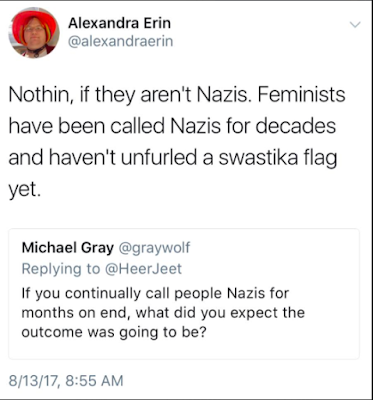 First of all, there is a thing where if you treat people like they are a certain thing, they have a tendency to fulfill that prophecy. But this mostly applies to CHILDREN and it does not apply to a thing so specific as fucking nazism. You treat a little kid like they're a bad kid and they'll act out because kids tend to think of adults as infallible, so they think they must be bad and will actually work to prove it true, because they can't yet handle the idea that in reality, most adults are wrong about most of the things they think and say.

But I have been called a feminazi more times than I could possibly remember, and I am so far from being an actual nazi. I am in fact, very much anti-nazi. If adults become nazis, it's because they wanted to be fucking nazis, or at best, because other nazis seduced them into becoming nazis.

Either than or men are just that much worse than women at having their own independent thoughts.
Posted by Not Sorry Feminism at 10:30 AM