These Smiling Cis Men Made Rape Insurance a Thing

Honestly, how fucking dare these men fucking smile for the fucking camera after signing a bill into law that makes it so women have to buy special extra health insurance in case they need an abortion, even if they got pregnant through rape or incest. 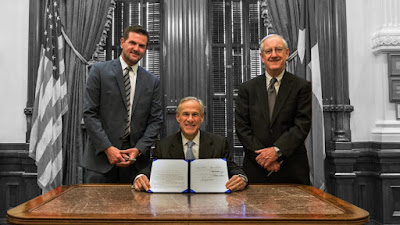 What the fuck are you smiling about? You just signed one of the grossest bills to ever fucking exist, you just made it so that many future rape victims will not be able to pay for a safe abortion, you just told the world that you don't think victims of rape and sexual abuse are worth an ounce of fucking compassion, you just made something that should make any human being go "what the fuck happened to your soul" a reality.

Random aside, it feels like it's been a long ass time since I've covered any news on a topic like this, like something specifically feminist and not about Donald Trump or white supremacists. Anyway FUCK YOU GREG.

But seriously. It's bad enough that this could effectively erase abortion coverage in the state of Texas because even among those who could afford to buy extra insurance to cover abortion, who would? Experts are predicting that after a while, insurance companies won't even offer it anymore. But eliminating the standard exceptions for rape and incest just make this so much more heinous. I mean I guess it's nice they're not pretending anymore. We all know they never gave a fuck about women (and they think only women need abortion access), much less about rape and sexual abuse victims. So thanks I guess for making it plain for all to see.

Getting voted the fuck out should wipe those ugly grins of your shit faces.
Posted by Not Sorry Feminism at 10:30 AM