I had an unexpected amount of anger leftover after the white supremacist rally on Sunday. I think it's related to the feeling of helplessness over seeing the entire Seattle Police Department go to such painstaking lengths to protect a group of violent nationalists-at-best from even having to see an opposing protest. It's an issue trigger for me. But also generally super fucked up.

And yet, as the days go by, more and more reports of this country rejecting nazism are coming out, and it's pretty amazing.

Go Daddy kicked the Daily Stormer, neo-nazi website, off their domain service, and Google followed suit just hours after those nazis shits tried to switch over.

After Charlottesville, more cities are moving to take down Confederate monuments

Multiple men photographed participating in the Chalottesville nazi rally have been identified and fired.

The organizer of said rally was straight up run out of town (the video of his terrified face is beautiful, highly recommended).

People in the South are tearing down confederate monuments themselves. 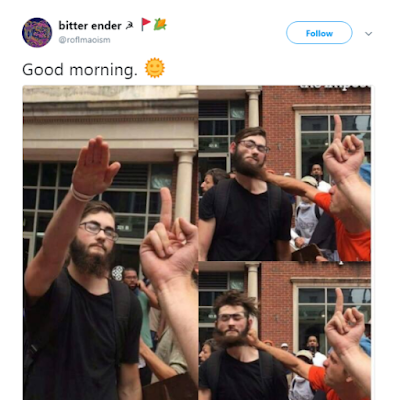 The backlash against white supremacists has been so intense that even Lord Dampnut was finally forced to denounce them, and they're talking about going back under their hoods:


That up there is actually really important, pay attention. They're saying that they need to tone down the overt nazism to appeal to the "average white person" - their strategy for decades until now, when they may have blown their load early. They're talking about going back to dog whistles that leftists recognize but "normies" (their word for average individuals, centrists, apolitical people just trying to live their lives) don't. We have to keep being vigilant, and we should ride this momentum to help average people recognize nazi dog whistles for what they are. That post is titled "fixing the alt right," then talks about clear white supremacist goals. Yet more evidence that the "alt right" is a more family friendly face for nazis.

I may not have much hope for the future of humanity, but if we can stomp nazis back down into their filthy holes before climate change throws everything into chaos, we'll be better off. At the very least, we'll have something to feel good about.
Posted by Not Sorry Feminism at 12:56 PM