This headline might perfectly encapsulate the phenomenon of Islamophobia.

Some group members took the picture — posted with the comment, “what do people think of this?" — as proof that a ban was needed. More than 100 soon commented on it. “It looks really scary, should be banned. You can never know who is under there. Could be terrorists with weapons,” one user wrote, according to a translation from the Local website. Others described it as “frightening” and “tragic.”

However, when you look at the photograph above more closely, it may become apparent that the photo itself is irrelevant to any debate about Islam in Norway. Why? Well, those are not burqas. They're bus seats.

This is the photo: 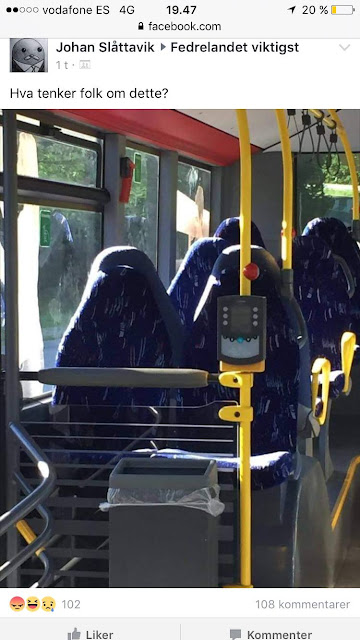 I don't know how this could possibly be funnier. Maybe if Islamophobia wasn't so deadly.

But I mean, how do you look at that for more than half a second and see burqas? Burqas aren't typically decorated with ugly random white lines. That's what makes it such a perfect analogy for bigotry, though. They've given the issue about half a thought and decided that MUSLIMS BAD.
Posted by Not Sorry Feminism at 2:30 PM