Okay. White supremacist rally #2. This one was a little more interesting. And I made sure to stay until they end.

We met at Denny Park, and, likely due to the events in Charlottesville the day before, many more people than I expected showed up for the counter-protest. There were probably over a thousand of us, with many organizations representing. There was a massive canvas constitution carried by many individuals that had a ton of signatures. Kinda cool, not my thing.

Anyway, we marched down toward Westlake, but before we could get within a few blocks of them or anywhere that was even in view of Westlake Park where the white supremacists had their stage, the police started blocking our route. We tried going around, but it soon became clear that the SPD was not going to let us get to Westlake. This was later confirmed by a local politician who contacted the Chief of Police and was told that it was planned ahead of time to "keep the two groups apart."


So to sum up, Seattle not only allowed white supremacists a platform to spew their hateful rhetoric, city officials made sure that they would be able to do so unchallenged. There would be no demonstration of many hundreds of anti-racist activists showing the more "neutral" residents what is the dominant view of our city. I don't know how long these racists were allowed to speak to passing residents without anybody there to counter their poison.

The outrage over this resulting in a small altercation with police. First it was just lining up and chanting "who do you serve, who do you protect?" But police don't care, they can't be shamed into doing the right thing. So local antifa tried to get the crowd to push through the police line (after dousing the cops with a big helping of silly string and glitter), but Seattle liberals don't have the stomach for this, and there aren't enough antifa to accomplish this on their own. I tried to help, but it took very little for the SPD to release flash bangs, pepper spray, and tear gas - and the bulk of the crowd ran. I got a taste of the tear gas and retreated, having a sensitive throat and a bit of a fear of choking. I came back, as did most people, but it was clear that going through the police was not going to work. A large group of hippies started singing and sitting in the street, but that wasn't going to be effective either, obviously.

It did make for a touching photo op, though.

That was when a friend of mine heard that a decent amount of protesters had separately made their way to Westlake to heckle the white supremacists. Even with all the extra cops brought in, they couldn't cover every path all the time. So my friend and I broke off and made it to Westlake Park, where the hate rally was still going on. There was a small crowd of common racists, militia men, "Proud Boys," and other white assholes in front of the stage, blocked off by small metal barricades from the counter-protesters.

At this point, I'm going to put the rest of the post behind the jump because there are so many photos. But it gets better.

What I saw there was incredible. More than anybody else, young women, including young women of color (some of them may have even been under age, they looked that young) got up onto the stage to speak out against white supremacy. They took the mic from the leader of the white supremacist rally, this "Patriot Prayer" asshole, and stood just feet away from big men in bulletproof vests and helmets who may have been carrying concealed guns and spoke about how diversity is wonderful, racism is vile, white privilege is real, and one indigenous woman even yelled at the crowd before her about how we white people were on stolen ground, in a city built upon a mass grave of her ancestors.

I can't even fathom this level of bravery? I was humbled by their passion, and just, so much bravery. I would never have the guts to do that, and I'm super white.

As the "rally" went on, the counter-protesters booed and heckled constant chiming in by the Patriot Prayer dude after speakers, saying shit like "all cultures have done bad things" (wow no shit, you read that on a racist napkin). Other speakers were "patriots" and various levels of white supremacist. I went around taking photos and generally taking stock of the situation. I got a lot of photos of Proud Boys, militia dudes, and others. I also got plenty of video, which I'm going to try and cut and organize into something watchable.

Here's some characters to avoid or maybe fire: 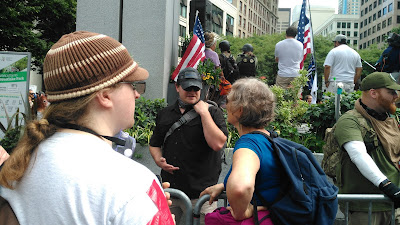 Remember you can click on any of these to enlarge them.

The dudes in red hats and black polos with the gold trim are the "Proud Boys." Stay the fuck away. They hate women. And despite my hearing them repeatedly tell people that white supremacists are not welcome in their little group, they're nationalists and racists.

Once the rally was finished, the white supremacists mostly stayed in their little area, but people moved the metal barriers so that they could intermingle, and for a long time, nothing happened. Except a couple white supremacists got their MAGA hats snatched and I saw one guy start to light one on fire, which was awesome. Then, the police came and made a careful path with their bikes into the white supremacist area in front of the stage, then cops on foot filed in through the path. They then made a path on the other side so that the white supremacists could be carefully escorted out. They put a LOT of effort into making sure these hate-mongers stayed safe.

I tried to capture this shit in photos: 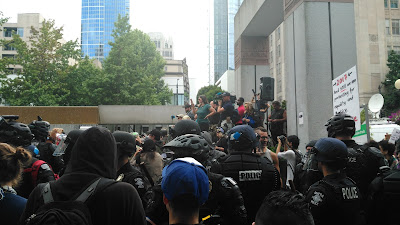 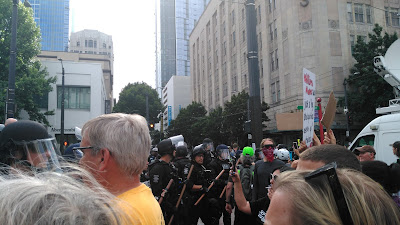 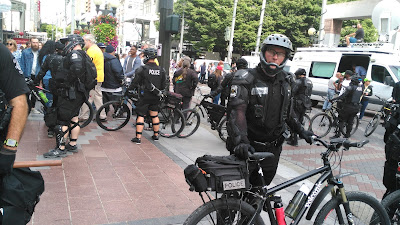 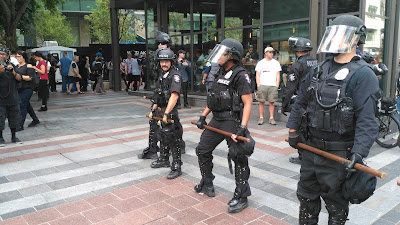 Oh and guess who I spotted leaving from the stage area with the white supremacists? Our old friend Kyle. I'm sure just there to document different opinions or whatever.

After that, my feet were killing me, and my friend had long ago left. I started heading back to my car near Denny Park, and came upon a small group of Proud Boys being escorted by a crap load of police. 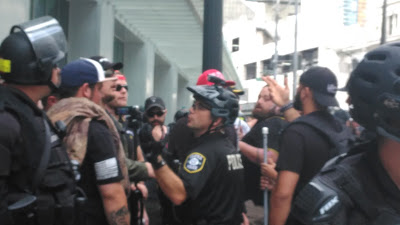 I got more video of this than photos. It just floored me how many cops were protecting them. I'm hoping it was at least in part to stop them from attacking people like they did last time.

I followed for a bit, unsure of where they were being escorted to. But then I saw a group of antifa following them, and decided to leave the effort to the professionals with better shoes.

That was everything I saw. I'm angry at the SPD for keeping the bulk of the protesters from effectively exercising their freedom of demonstration. I'm glad enough people made it to Westlake Park to still make it clear that white supremacists are not welcome in Seattle. I'm still disgusted that there were even the small amount of virulent racists that showed up in my city. They will keep calling back as long as the police put so much effort into protecting them from real consequences.

I am once again feeling like I need to learn to fight.
Posted by Not Sorry Feminism at 12:17 PM