Been too long since I've done one of these. Things have been a little on the negative side lately. But once again, it's the girls and women of color who are taking a stand.

On Wednesday, a group of 15 teenage girls, dressed in brightly colored gowns, stood in front of the Texas State Capitol to participate in one of Latin American culture’s most cherished traditions: the quinceañera.

But this quinceañera was more than simply a coming-of-age celebration. Instead, it was a public protest against one of the most viciously anti-immigrant pieces of legislation in Texas’ recent history: SB4, the so-called “sanctuary cities bill.”


LOOK AT THESE KIDS. 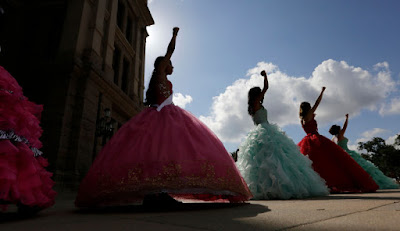 Again, I have to marvel at how amazing teens are today. I was a worthless little shit at age 15. Of course, I'm white, so I didn't have much to protest at a time when I really only cared about myself.

These girls, on the other hand...


Any anti-immigrant law is hurting this country immensely by keeping out or keeping under the rug amazing individuals like these girls. Let everyone in. Especially since it's our government making countries in places like Latin America unlivable in the first place.
Posted by Not Sorry Feminism at 10:51 AM