To the People Who Call Others "Special Snowflakes"

This is for you: 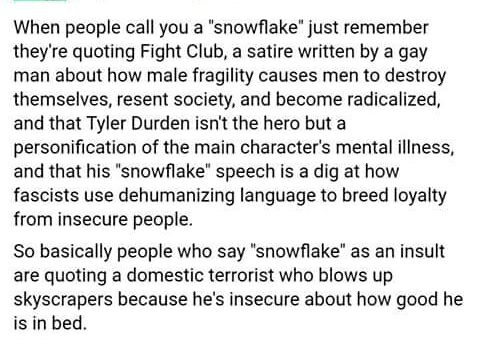 "When people call you a 'snowflake' just remember they're quoting Fight Club, a satire written by a gay man about how male fragility causes men to destroy themselves, resent society, and become radicalized, and that Tyler Durden isn't the hero but a personification of the main character's mental illness, and that his 'snowflake' speech is a dig at how fascists use dehumanizing language to breed loyalty from insecure people.

So basically people who say 'snowflake' as an insult are quoting a domestic terrorist who blows up skyscrapers because he's insecure about how good he is in bed."]


You suck at life.