Photos From the Seattle March for Islamophobia

This is not surprising. The SPD made it no secret that they were there to protect the white supremacists. This is what met us counter-protesters at their rally point: 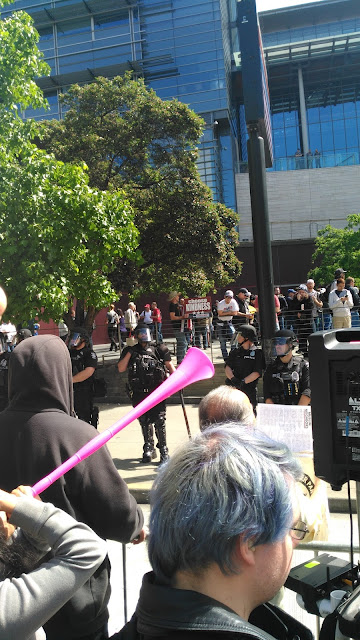 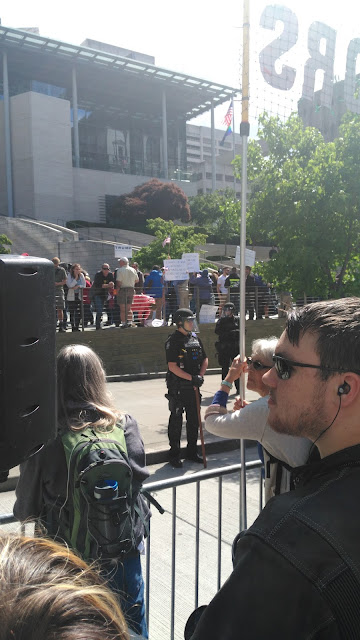 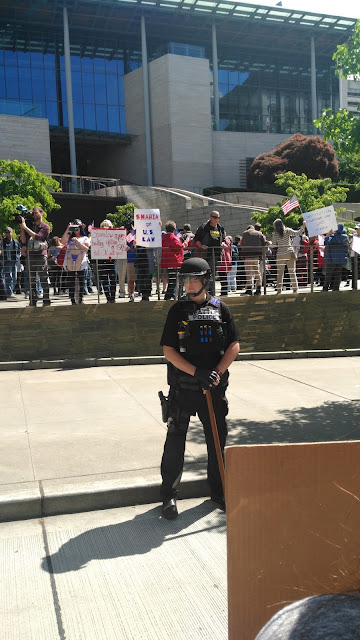 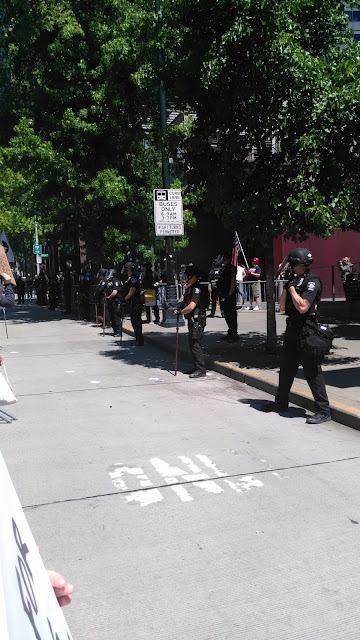 Cops, facing us, in riot gear, with big fucking sticks in their hands. That they didn't use to protect counter-protests when they were attacked by the violent fascists the above cops can be seen protecting. Yeah.

I left the counter-protest before the attack happened, thankfully. I was there with a new and incredibly brave friend who held a sign declaring Jewish solidarity with Muslims, and several of the racists across the divide singled her out, pointing at her and yelling, though it was impossible to hear them with all the noise, but they were clearly calling her a "Jew." It was scary. She didn't give a fuck and was ready to fight them and I would have fought with her, but I think we all know what these racists are capable of.

Other things I witnessed included a few of the men and one white woman throwing up the white power sign at us. This is something you should familiarize yourself with. It looks like the "OK" sign but has been appropriated by the modern white supremacist crowd. It's likely that this was done with the intent of confusing or "trolling" people (see this image from 4chan) though who can tell in this era of post-truth?

The fact is that white supremacists are using it to identify one another and and scare people of color and others. They chose it because it's still a very common and innocuous gesture to the vast majority of people, so they can accuse anyone using the "OK" sign of being a white supremacist, including people like President Barack Obama. So don't assume anyone using the OK sign is a racist, of course. But if they're doing it at a white supremacist rally, pointing it at people for seemingly no reason, or doing it with both hands and crossing their arms like it's some kind of gang symbol, assume the worst. Even if they're just doing it to "troll" people, it still tells you who they associate with, and they're still making a joke out of something supremely unfunny and making people of color fear for their lives, at the very least.

These are some of the people I caught making that sign: 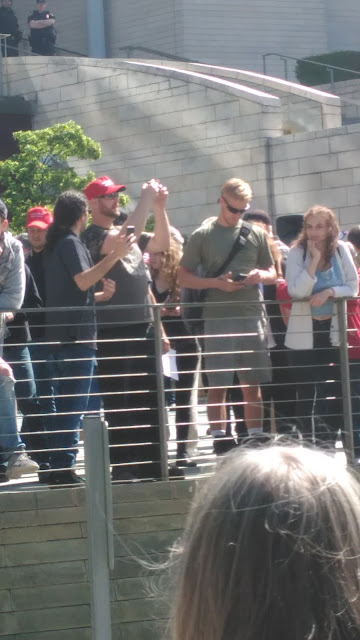 Including the white woman on the right with the nasty hair. She was pointing and laughing at us with the men who think she's inferior to them and even blew me a kiss as I was capturing her white supremacist face. 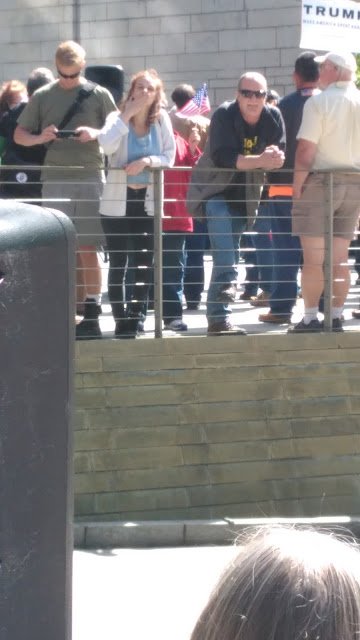 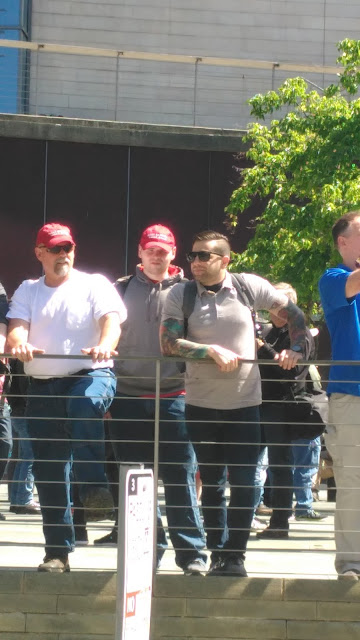 This guy in the sunglasses and tattoos was the worst. He threw up the white power "OK" sign many times and him and his buddies were the ones shouting at my Jewish friend. I got him on video throwing up the sign and am hoping to figure out his name and employer. 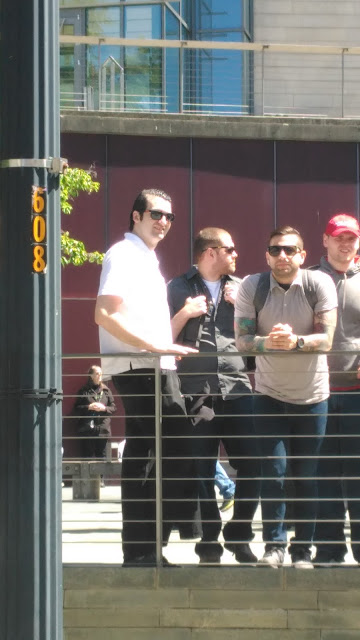 These three are definite nazis. All throwing up the sign. The one on the left looks like a dump Richard Spencer took after yet another punch in the face. 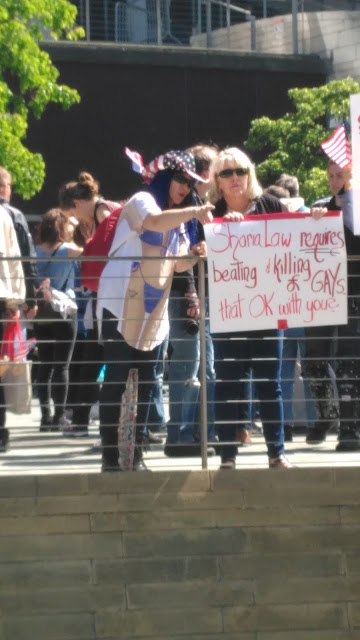 I'm assuming the ugly bikini shirt was meant to be offensive to Muslims. Racist ladies who know nothing about Sharia law or Islam. 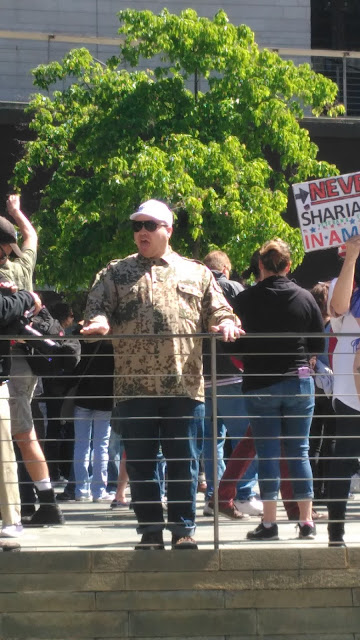 This guy was just embarrassing. He kept pulling the "Donald Trump mocking a disabled reporter" shit at us. Like he was an annoying five-year-old. But an actual adult. 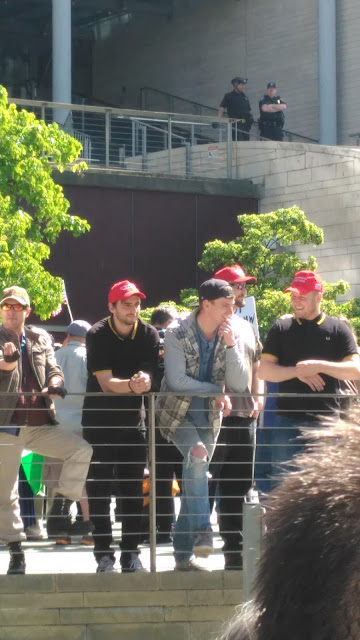 Why do all racist white dudes look exactly the same? 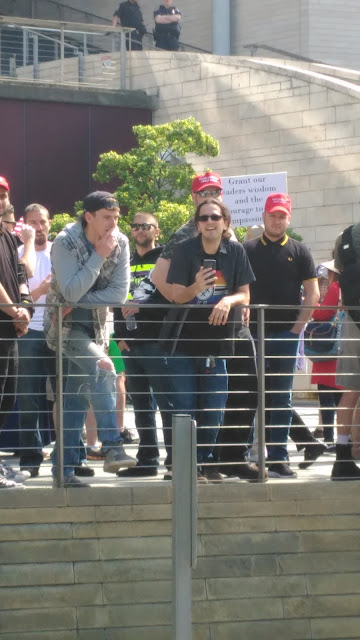 This nerd. Had a rainbow kekistan flag on his shirt, which has got to be the most embarrassing and disgusting thing I've ever seen. Came with a matching smarmy face, is a good case for letting humanity destroy itself. 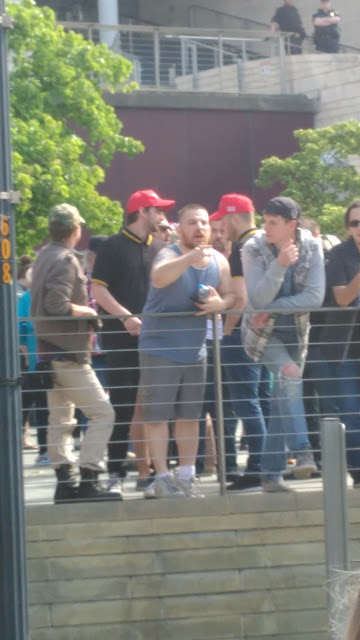 This guy was just very angry. Lots of finger jabbing and trying really hard to yell at us over the noise but he failed, couldn't hear anything he said. Desperately needs a chill pill and/or to be locked up because he's probably already assaulted people, especially any women in his life. 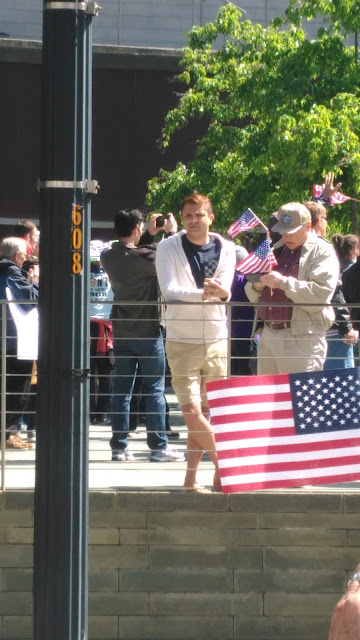 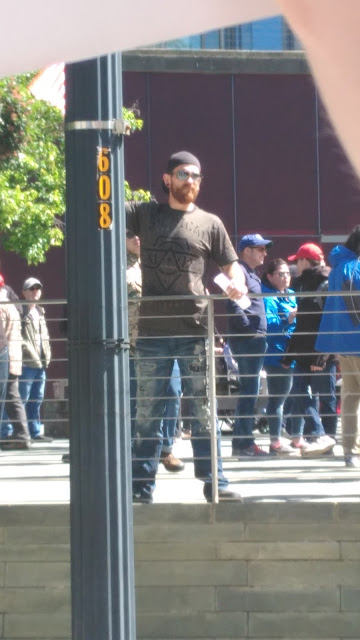 This guy thought we would hear him if he rolled up a piece of paper into a tube and yelled into it. 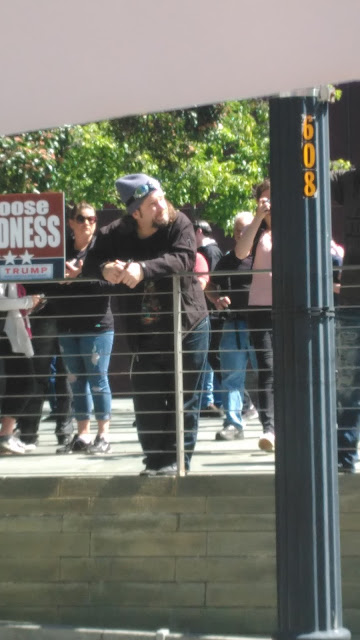 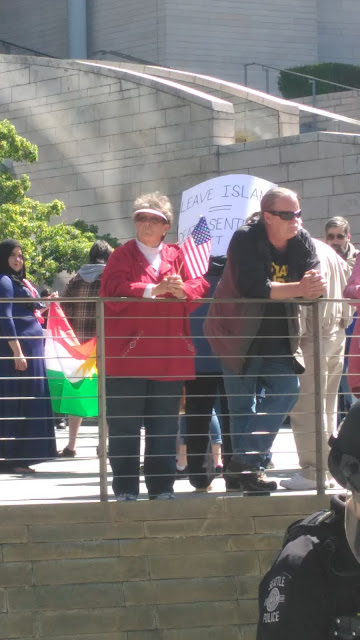 A lot of old white racists there, probably only watch Fox News, ironically are a drain on society. One token hijabi woman there, I hope she's ok.

Those are the best photos I got. Avoid all these people. I'll be clipping the video I got and posting it later. I have more of the same people and can post them upon request if you think you know them but need other photos to be sure.

The good news is that the counter-protest was likely 10 times bigger than the racism-fest. Antifa was there with noisemakers and this serious speaker setup that made a freight train noise. All the racists could do was pretend they liked it while their speakers spoke into the wind. Was pretty awesome.
Posted by Not Sorry Feminism at 1:51 PM