I mentioned in my post about the "march against Sharia law" that multiple people within the Islamophobia rally were throwing up a hand sign that looks like the "OK" signal. This: 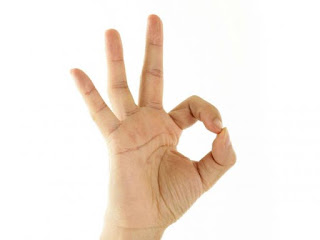 I want to reiterate what I said about this because it's important to be aware of fascist tactics during this resurgence of fascism.

Other things I witnessed included a few of the men and one white woman throwing up the white power sign at us. This is something you should familiarize yourself with. It looks like the "OK" sign but has been appropriated by the modern white supremacist crowd. It's likely that this was done with the intent of confusing or "trolling" people (see this image from 4chan) though who can tell in this era of post-truth?

The fact is that white supremacists are using it to identify one another and and scare people of color and others. They chose it because it's still a very common and innocuous gesture to the vast majority of people, so they can accuse anyone using the "OK" sign of being a white supremacist, including people like President Barack Obama. So don't assume anyone using the OK sign is a racist, of course. But if they're doing it at a white supremacist rally, pointing it at people for seemingly no reason, or doing it with both hands and crossing their arms like it's some kind of gang symbol, assume the worst. Even if they're just doing it to "troll" people, it still tells you who they associate with, and they're still making a joke out of something supremely unfunny and making people of color fear for their lives, at the very least.


These people who call themselves "trolls" will insist that they're just doing these things for laughs. Whether it's spreading the idea that the OK sign is a white supremacist signal, or posting anti-semitic cartoons, or harassing marginalized persons and calling them hateful slurs, or doing the nazi salute, or pretty much acting and talking like straight up nazis all the time.

The thing is, if you become indistinguishable from the thing you're supposedly "pretending" to be to "trigger" people for laughs, then you might as well be that thing. You're causing just as much harm. And these people prove themselves again and again to be incredibly violent the moment anyone does anything to suggest that they should stop. So yeah, people see your "kekistan" flags and they feel afraid, unsafe, and unwelcome in the community. That's not their fault, it's yours. And if you're scaring all people of color, Jewish people, and LGBT+ people out of your community by pretending to be nazis, are you really any different from nazis? Other than having the most transparent, useless, and pathetic excuse in the universe: "it's just a joke."

Your defense is a joke.

So no matter what the fascist imagery is, no matter if they really did make up that something innocuous is a white supremacist symbol, it still identifies them as what they are. And if any of them tell you that they "just joking" or "just making fun of people who all everybody nazis," simply explain to them that their "jokes" have made it so none of them can be trusted when they say they're joking and not really fascists, and then run them out of town.
Posted by Not Sorry Feminism at 4:04 PM