I don't think it's any secret how I feel about protests and violence. If you haven't been following along, I think the fact that one trash can getting knocked over results in a protest being called "violent" and a single bottle being thrown at a line of cops already in riot gear results in it being upgraded to a "riot" in this country is fucking ridiculous, I mean have you seen how protests go down in other countries?

Also, I think fighting for basic human rights is more important than corporate property or city trash cans, and that riots, even real riots, are just the populace fighting back in self defense against massive state violence in the form of hoarding resources that could be used to make sure not one single person ever went hungry on this planet.

That being said, I was more than a little disappointed to hear that this is how the Seattle May Day protests went down:

State troopers suited up. Seattle police prepared for the worst. And even the Starbucks Reserve Roastery and Tasting Room on Capitol Hill was clad in plywood in preparation for any May Day vandalism.

But in the end, all Seattle got out of Monday’s protests were a “peace joint” shared between opposing demonstrators and sips from a Pepsi can, mocking a controversial ad featuring model and Kardashian clan member Kendall Jenner as a soda-wielding protester.

I mean, I guess at least if there are enough Dampnut supporters in the area to even have a face-off against all the Seattle liberals, I'd prefer it if they would be on cannabis because maybe they'll be a little more chill in their support of fascism. But come on, Seattle, are you really gonna share a fucking joint with these people? You're gonna look at people supporting a massive racists, serial rapist, misogynist, xenophobe, fascist asshole filling the White House with nazis and very possibly trying to make himself dictator, and then give them free weed?

Meanwhile black people are still somehow getting arrested in this state for cannabis-related "offenses" even though it's legal.

At least something happened in Olympia.

And in Washington’s capitol, Olympia police reported they took at least eight people into custody after black-clad protesters throwing rocks and smashing windows injured several officers. A sling shot and sack of river rocks and cans of LaCroix were among the weapons police say were used on officers.


Miraculously, no officers were killed by the rocks or the sparkling water. Lmao.


Some of the weapons the rioters used on your OlyPD officers: pic.twitter.com/isPgwYjIHZ
— Olympia Police Dept (@OlyPD) May 2, 2017


My stars! What's next, a board with a nail in it? 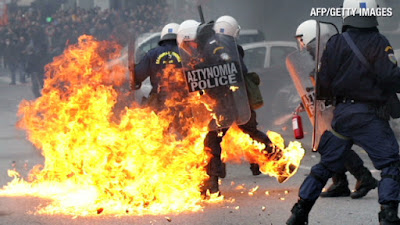