Rich People Live in Their Own World

It never ceases to amaze me just how intensely out of touch rich people are from the rest of us. This is from last year and for all I can remember maybe I wrote about it then but it's going around Tumblr now and it's still funny so. 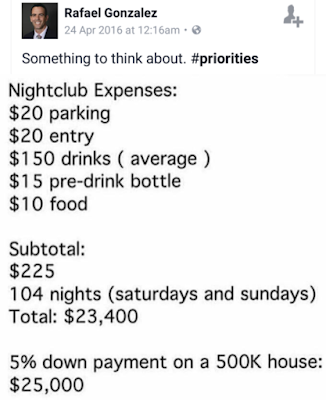 "Something to think about. #priorities"

This is apparently in response to the never-ending clueless thinkpieces pondering why millennials don't just BUY things like previous generations did. They can't seem to grasp that the median millennial salary is $23,000 per year while both the cost of living and the price of houses and average rent have skyrocketed. Because they're either so rich that they don't even have to think about how much something costs them ever or already own a house that they bought back when it was, you know, feasible for the average person, they keep coming up with reasons that it must be the fault of millennials rather than the fault of late-stage, terminal capitalism.

You may have heard about their latest desperate suggestion for how we can save up money for a house being to stop buying avocado toast.

I didn't even know this was a thing. Sounds like some yuppie shit I wouldn't spend money on already.

But as out of touch as previous generations are with the realities of the average millennial life, rich people live in an entirely different galaxy from us. The above tweet demonstrates that perfectly. Because that is not the weekend of any millennial I have ever met. That is the weekend of a rich person.

I have been to exactly one actual nightclub in my life. It was loud, overpriced, crowded, and ridiculous and I'll be glad never to return. I will occasionally go to a bar for a birthday party or to support my musical friends and their bands, for which I might pay a cover of around $10 after finding free parking or bussing into Seattle. I don't usually buy food. And I cannot possibly buy $165 on alcohol and then leave the bar alive. Probably the most I've ever spent on a single night on alcohol is $50, and that gets me trashed because I rarely let myself splurge like that and in fact probably drink any amount of alcohol on average maybe once per month, so my tolerance is low.

I cannot possibly imagine spending that much on alcohol both Saturday and Sunday night, especially because I actually have to work on Monday? Maybe the creator of that list meant Friday and Saturday but then again maybe not, because chances are that person doesn't even actually work.

That list is so out of the realm of reality for millennials. Even the 5% down payment sounds completely wrong. I mean, I've never even looked into buying a house because LOL yeah right, I don't think I'll ever buy a house unless it's tiny or made out of those big metal container things or something, but I feel like a 5% down payment is way low.

I don't know why I have to explain this, but let me see if I can get this through rich people's heads.

POOR PEOPLE ARE POOR. WE DON'T HAVE MONEY TO SPEND ON CLUBBING. WE CAN BARELY SAVE UP MONEY FOR ANYTHING AND EVEN IF WE DO MANAGE TO SAVE UP A LITTLE, SOME BEING-POOR-RELATED EMERGENCY WILL INEVITABLY EAT UP OUR SAVINGS ACCOUNT SO WE'RE BACK TO SQUARE ONE. WE CANNOT BUY A FUCKING HOUSE WITH AVOCADO MONEY AND WE DO NOT SPEND $550 EVERY WEEKEND ON CLUBBING. THANK YOU.
Posted by Not Sorry Feminism at 10:30 AM