In yet another example of how intensely violent transmisogyny is in our world today, Assigned Male Comics, which is responsible for wonderful, hilarious, touching, and very educational webcomics about the experiences of a trans woman in a transmisogynistic society, was hacked. Author Sophie Labelle's website and Facebook page were hacked and her content was replaced with violent neo-Nazi imagery. She was then doxxed and sent thousands of death threats. She's safe with a friend and in the process of moving, something she never should have had to do because of violent transmisogynists threatening her safety.

You can see her official message here.

It's amazing that neo-Nazis can feel so threatened by a webcomic dedicated to educating people (quite gently) about issues faced by trans, non-binary, intersex, and gender non-conforming individuals that they have to launch a coordinated and ultimately fruitless attack on the author. But that's what these assholes do, because they're hateful, pathetic people.

The shittier parts of Reddit have already declared that she must have did it to herself while neo-Nazi "alt right" sites are claiming credit for doing it. I know because this is some of the first shit that comes up when you google "assigned male comic hacked." Perhaps because no credible news outlets have yet bothered to pick up this story. Hello? Are you out there? Violent transmisogyny forcing widely beloved artist and author to move to a new location over here. Anybody?

Hopefully at least a couple of those popular liberal sites notice. I might need to start sending out emails.

Anyway, I stand in solidarity with Sophie, and I want to encourage anyone who isn't already regularly reading her content to check her out in the next couple days as she gets everything back up and running. She is a treasure that no pathetic Nazi fuck can take away from us.

I mean, look how cute and awesome this is: 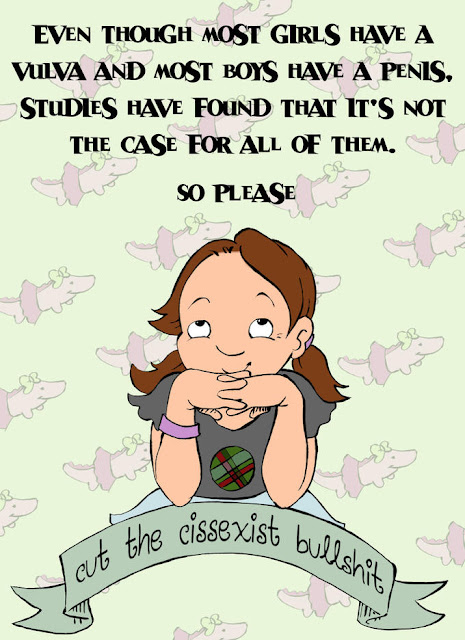 And that's just a tiny taste of the awesomeness. Go Sophie! We love you!
Posted by Not Sorry Feminism at 3:00 PM