[UPDATED] There is an Actual Down With Trans Bus

A little background. There's a bit of a running joke around certain Tumblr circles, by which I mean trans and non-binary people. It originated when some transphobe posted a not at all believable story about innocently walking down the street when a bus rolled up and a bunch of trans people got off wearing shirts that said "DOWN WITH CIS" and started beating up the person's friend.

Trans people, who are clearly used to this kind of bizarre, bigoted bullshit, turned it into a massive joke, Photoshopping "down with cis" onto everything and generally making a running gag about the down with cis bus. Nearly two years later, this pops up: 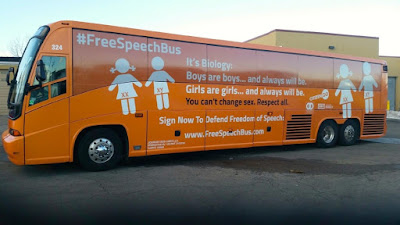 The "free speech bus" makes no sense because this has nothing to do with free speech. This is the down with trans bus.

It would be funny if it weren't so nauseatingly, enragingly awful. that and the "Respect all" bit. "YOUR GENDER IS WHAT I SAY IT IS. Respect all."

On Wednesday, they parked outside the United Nations headquarters, where ambassadors are considering a sex education resolution that a spokesperson for the bus argued promotes “an ideology that gender is fluid.”

“We are trying to strike back against that,” said Joseph Grabowski, a spokesperson for the National Organization for Marriage, one of the three conservative groups behind the project. They hope parading the bus through major cities will unleash a silent majority that they believe is frustrated by shifting norms about gender and families.


Sounds like Nazis. Except since when are transphobes the minority or silent? Since never, that's when. Not in this country or the UK, at least.

This giant turd on wheels is going on tour in the Northeastern states, stopping in New Haven, Boston, Philadelphia, and DC. I live on the West coast, unfortunately, but if I had the ability I'd be hopping on a plan just to hunt this thing down with several cartons of eggs and a bag of sugar.

Seriously, if you're cis, and you see this bus around town, consider vandalism! Because this bus might as well say "go ahead and violently attack every trans person you see on the street! Your bigotry and hatred are valid and will be supported!"

Fuck you, transphobes. Fuck you, fuck your complete non-understanding of biology, fuck your bigotry, fuck your inability to mind your own goddamn business, and fuck the bus you rode in on.

It's been suggested that the image above is a Photoshop job. This is real: 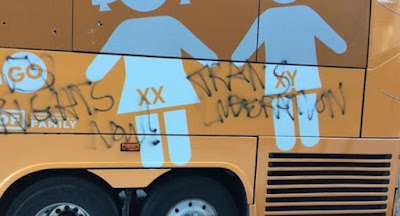 Posted by Not Sorry Feminism at 1:08 PM