Everything's fine, I just didn't feel like blogging at work yesterday. And it's been difficult to blog at home because I got Mass Effect: Andromeda and it's actually great. It's much more open-world and less linear than the other Mass Effects, which I very much prefer, but which will make any game glitchy and requires sacrifices in terms of graphics, which has made some people very upset. Or they're still mad because you can still decide to be either a man or a woman in a BioWare game.

The point is, here is my character: 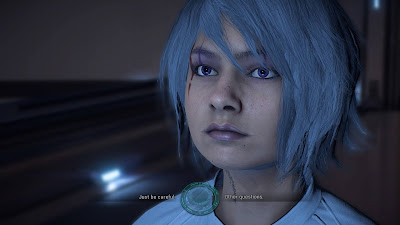 She is the cutest. Isn't she the cutest? I tried to make her look tough and instead she looks like a cool 15-year-old who's been put in charge of saving a hundred thousand people from dying in a strange galaxy.

And despite the fact that the graphics aren't holy shit perfect, BioWare has done a great job with subtle body language and hilarious facial expressions that really give a new level of depth to the characters. Fuck the haters. This game is great. Next time more options for relationships between two men. Thanks.
Posted by Not Sorry Feminism at 11:16 AM