Last night, part of Lord Dampnut's agonizingly long joint address was his announcement that he asked the Department of Homeland Security to set up a new office in the federal office which he, in the cruelest irony, called "Voice." Victims Of Immigration Crime Engagement.

The purpose of this special task force is to "serve" the "ignored" and "silenced" "victims" of "immigrant crime." The excessive use of scare quotes there is an expression of my extreme anger at this announcement. The entire thing is a farce designed to demonize an already highly oppressed and very much silenced population in this country, and he has the fucking audacity to call it "VOICE."

I got so upset last night that I hashtagged it.

#HearThisVoice I have only ever been criminally harmed by white men.
— Not Sorry Feminism (@NotSorryFem) March 1, 2017


#HearThisVoice I stand against "VOICE" and any other program dedicated to demonizing a group of already oppressed people.
— Not Sorry Feminism (@NotSorryFem) March 1, 2017


It didn't end up catching on, nor did anything else. I'm not hearing much about the horrificness that is this proposed task force, which is upsetting me even more.

Let me be clear. This is not your ordinary effort to demonize undocumented immigrants. Lord Dampnut has done plenty of that already. No, this "VOICE" thing is something straight out of the Nazi playbook, LITERALLY. They had a special section in a Nazi newspaper where they published lists of crimes committed by Jewish people, which is essentially what "VOICE" would be, only instead of a paper, it's an entire office of the federal government.

The unit will come under the auspices of Immigration and Customs Enforcement (ICE), the Department of Homeland Security confirmed.

ICE is expected to publish a weekly list of all crimes committed by what it terms "aliens". 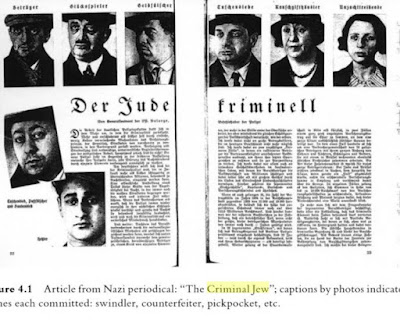 Terrified yet? This is a specific, organized effort to set undocumented immigrants up for even more horrific abuse than they've already suffered. It was used to set the Jewish community in Nazi Germany up to be taken from their homes and shipped off to concentration camps. Oh wait, that's already happening with undocumented immigrants here! So, what's next?

What, you think it can't happen again? Haven't you said that about everything else that's happened up to now?

We need to be screaming against this. We need to be out in the streets. Fucking get pissed about this, for the love of god.

Posted by Not Sorry Feminism at 1:45 PM