Are We in the Upside-Down or What

I'm having a bit of a hard time today, to be perfectly honest. Also, that is an understatement.

As you may have noticed, I'm having a tough time figuring out why people are so fantastically willing to be screwed by capitalism. And I know, I know, I really should understand. After all, it was just a few years ago that I was one of the suckers who was convinced that capitalism was the only system that worked, somehow ignorant of the fact that it doesn't fucking work and is not working, or, for a different perspective, is designed to only "work" for a privileged few.

But I feel like, when presented with new information, when challenged to consider whether a system that exploits that vast majority of people on the planet, leaving billions food insecure, living in substandard housing and/or without clean drinking water and/or without access to adequate healthcare, and so on, is actually something that should be supported, I was able to listen and change my mind pretty quickly and easily. When people asked me "When has a true socialist or communist system been allowed to exist unimpeded by capitalist nations," I was able to admit that I couldn't name a single instance, and thought, "huh, perhaps I was wrong."

And when fascism came knocking at my country's door, I went, "oh wow, that's fascism."

The point is that the thing I really can't handle right now is the tendency for so many other people to not only fail to recognize that capitalism hurts people and fascism is fascism, but to cling to and defend these systems. To lovingly embrace their own oppression and lash out at me for threatening it. 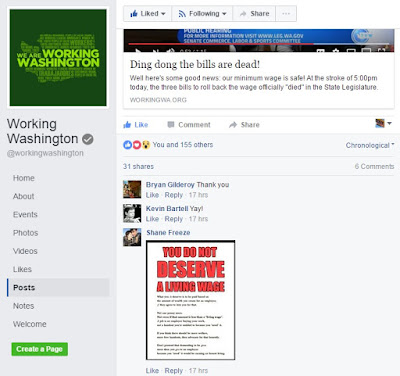 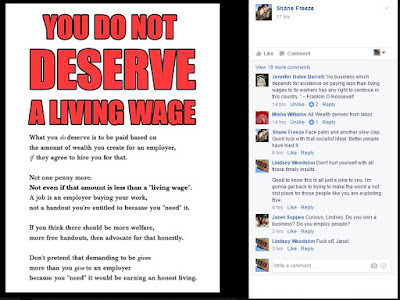 If you click on those images to see them at full size, you can read a horrible bit of text that basically says "your bosses get to decide what you're worth and fuck you." You can also see the end of an extended argument I had with the guy who posted it. Actually, not so much an argument, but him being an ass and me unloading on him after I found out that he's an employer. He suggested that he has no boss and has his own company. So he's not actually a pathetic patsy, he's just fucking evil.

This is his sleazy, gross face, by the way: 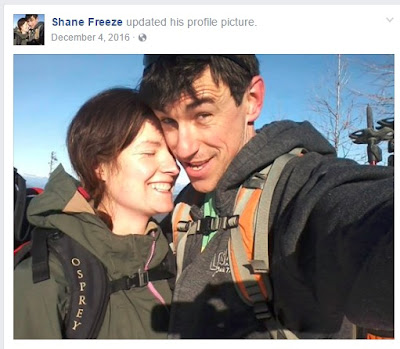 I don't think that's his real name. Because what kind of name is that. And his Facebook profile says he worked for Freeze, Inc., but I looked it up and that company was started by two guys who have regular, non-douchey names. Anyway.

Then you can see me telling Janet to fuck off, because that's where I'm at today. I'm not in the mood to have someone tell me that because I've never been in a position to exploit others, I don't get to summarize scholarly thought on capitalism that's been discussed by all sorts of people around the globe, including those who have been in positions of that kind of power.

But also, Janet, what the fuck? You don't appear to own your own company. I mean maybe you do, and you're just like Shane, wanting to keep workers oppressed and have us give up any little bit of power we have left to those who exploit us. But if she's doesn't, then she's using her own time and energy to defend the system that exploits and oppresses her. Then she posted this:

That was this morning, and my reply is indicative of how I still feel. How in the fuck is raising the wages of workers exploiting them??? First of all, the vast majority of workers in the U.S. are not represented by unions today. If they are lucky enough to be in a union position, whether or not that union is corrupt is an entirely different issue. I'm sure I don't have to tell my readers that unions are the reason workers have any rights in this country, including a right to overtime pay after 40 hours, weekends, holidays, safety equipment, child labor laws, etc. But as unions have been demonized and membership numbers have dropped, those right have been slowly slipping away from us. Because the bosses are taking them away. So way to go, Janet. Not only do you not make any sense, you're helping guarantee the revocation of your rights.

Okay. Then I went over to Tumblr, and saw that this had happened, in response to that fucked up bill introduce in Arizona that would have allowed authorities to imprison you and literally break into your home and take your stuff if you in any way participated in a protest that "turned violent" in any way for any reason, even if you yourself did not commit any act of "violence" (which of course according to the bill included "violence" against property).


Text: "Its funny to see people responding like, “omg fascism!”  to a law that says violent rioters may be arrested, when these “protesters” are literally using violence to censor anything they disagree with and taking away other people’s constitutional right to free speech.  Tell me again, where is the fascism?  If you ask yourself this question and take a good hard look at yourself in the mirror, and at the facts, you may be surprised to find that you are on the wrong side of history."


This is where my brain nearly imploded. Protesters. Using "violence." To censor. What. The Fuck. Are you actually talking about.

This person is trying to argue that people protesting and some small scale property damage or a couple fights breaking out is being used to censor "anything they disagree with." And calling protesters fascists. They're trying to say that protesting is fascism. Protesting. Is fascism. And protesting actual fascism is fascism and puts you on "the wrong side of history."

Posted by Not Sorry Feminism at 1:38 PM