If there's one thing you need to realize, it's that the right doesn't play by the rules. They've clearly collectively decided that rules don't matter - the only thing that matters is winning, getting ahead, taking over everything, and maintaining their power. This includes Lord Dampnut and his Nut Brigade, pretty much every single Republican politician especially those in the federal congress, and the spastic mob of neo-nazis, white supremacists, nationalists, fascists, and general bigots who support these clowns.

We've already been over how they're dedicated to constant outright lying and blatant hypocrisy as a form of gaslighting. But they also have no qualms about spreading misinformation and falsehoods to directly attack their enemies. 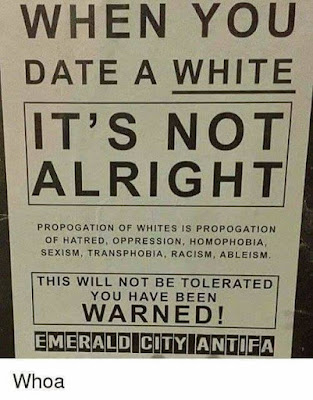 Emerald City Antifa, the antifascist group for the city of Seattle, posted this image on their Facebook page today explaining that it was not posted by them. Honestly, if you take a second to think about it, this is obvious fascist propaganda. First of all, the design of the flier is shit. Secondly, and more importantly, this is just a pathetic attempt to convince people that "anti-racist means anti-white," a classic neo-nazi, "alt-right" propaganda slogan. Antifascists do not believe this. Nobody believes this. Don't believe that anybody believes this.

In other "alt-right" news, there's a new site out called WeSearchr that places "bounties" on people. This has been used to place a bounty on the local hero antifa who punched Richard Spencer in the face. That's right. The nazis are so wounded by their not-leader getting cold cocked that they've put a price on his head via donations. The bounty for him is currently over 5,000 but will never amount to anything as no antifa would ever snitch on their own to fucking nazis for any amount of money. Still, be careful. If you're going to any anti-Trump or anti-fascist protest, it's a good idea to cover your face so you don't get caught on camera. It's common knowledge that the "alt-right" like to infiltrate their protests to film people for the purposes of doxxing.

And this WeSearchr shit is for doxxing. Make no mistake. It may say that they're just going to forward the victim's details to the police but LOL yeah right. Nazis have already shot and critically wounded an antifa medic in Seattle. And again, they aren't playing by any rules. They have no moral code. They're fucking nazis.
Posted by Not Sorry Feminism at 3:06 PM