Women's March Afterthoughts and Next Steps

Yes, the march was incredible. The numbers were out of this world. I've seen estimates as high as five million people worldwide protesting against Trump. And it was against Trump, no matter what the official mission statement said. We all know what this was about.

Here are some photos from my phone that don't do justice to the magnitude of the march: 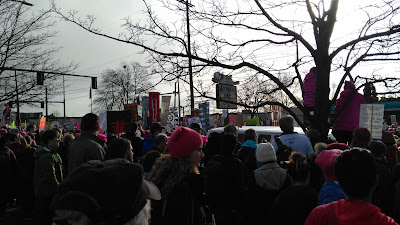 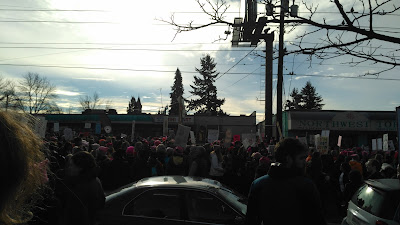 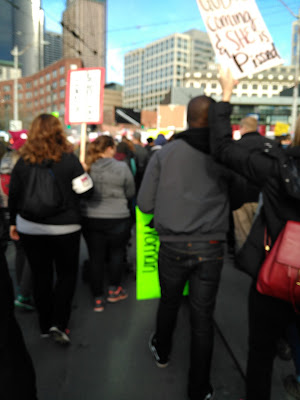 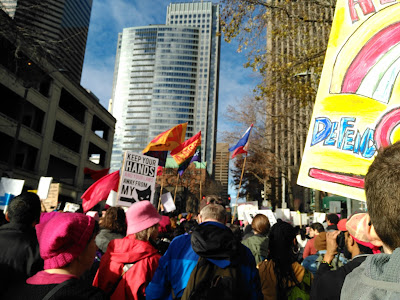 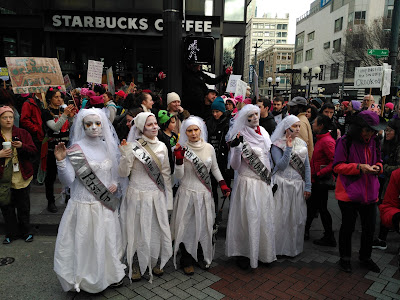 I appreciated that as we approached the start of the march, white women were shouting at everyone to move to the side to make way for the Native American women who would lead the procession. Along the way, women of color were making speeches on small platforms here and there, plus one white woman who was addressing all the rest of us white people about white privilege. These were the positive things I saw.

Negative things I saw include a lot of cissexist imagery and slogans, white women holding up signs containing lines from Formation, and people cheering for the police. And a lot of lambasting about how great it was that there was no violence during any of the Women's March protests. Unless you count the police presence, but these people clearly don't.

I've made it very clear on this blog that I am anti-police, anti-incarceration, and not at all opposed to people getting angry and breaking things at protests. If you insist on calling actions that are self-defense "violence," then I'm not against violence. I'm not against people standing up to the police because the police are the foot soldiers of oppression. I'm not against people breaking bank windows, knocking over trash cans, shoving over police barriers, or spray-painting expensive cars. I care about people more than I care about things.

I'm gonna defer to Angela Davis on the subject of violence in revolution:


The fact that the Women's March didn't involve any police violence is largely, maybe completely a white privilege. I've been to multiple protests and I've seen the difference in how police behave during Black Lives Matter demonstrations vs. those put on, led, and populated by mostly white feminists. I'll never forget how, during my first BLM protest, the police deliberately tried to cut us off from going back downtown to demonstrate during the Christmas tree lighting. Because they didn't want us to disrupt the very important event of someone moving a switch from "off" to "on." That protest got violent because the police instigated.

At other BLM protests, the police are just more menacing. They wear more riot gear. They openly hold large pepper spray containers and batons. At the Women's March on Seattle, I barely even saw cops.

At the same time, I do not condemn the anarchists who go and break stuff as long as white anarchists are not putting people of color in danger by doing it. The point of it is to show politicians, police, corporations, and capitalists in general that there's nothing real protecting them or their precious windows from being brought down, and that if we as a people decided to, we could drag them out onto the streets and hang them up by the ankles and take all their stuff. I approve of that message.

Real revolution always involves violence. Always. The oppressors don't care about who is morally superior. They're not impressed by your peacefulness.

This narrative that protests need to be 10000% peaceful is propaganda put out by the oppressors, by Republicans and the 1% and white supremacists, that has been incredibly successful. Especially since it's been amplified by neo-liberal Democrats who also have the ultimate goal of maintaining control over the common people (read: oppression). This is the result: 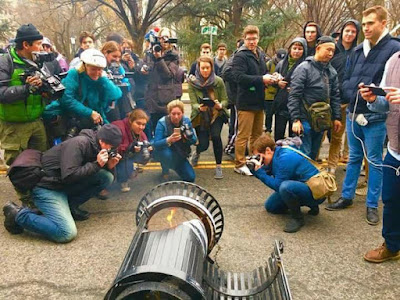 OH GOD, THE CARNAGE. A TRASH CAN HAS BEEN MURDERED IN THE STREET. THE HORROR.

I think all of those people are white, too. Amazing.

The media now sensationalizes even the tiniest amount of damage to objects, even city property, as "violence." Meanwhile, a guy murdering a black kid can be deemed "self-defense" and therefore is not violence. It could not be more ridiculous.

So what now? What do we do about this bullshit?

So many movements have fallen apart because of a failure to represent everyone, particularly those who are most affected by a problem. It is essential that we white people defer to people of color, that men defer to women, that we cis people defer to trans people, that straight people defer to the rest of us, that we able-bodied people defer to disabled people. The leadership of any anti-Trump, anti-fascist movement going forward needs to be handed over to a group of people who represent every axis of oppression. We need to make absolutely sure that every issue and every marginalized group is addressed and given the proper attention.

If we can't do that, the movement will fizzle out, Trump will become the new normal, and we will deserve whatever comes next. If you want the world to survive this, spread this message. Press the idea of privilege and demand diverse leadership. I have started working on a local city anti-bigotry organization, but I hope that I can eventually cede leadership to a woman of color.

Let's not repeat the mistakes of previous movements. If we can't do it right this time, we may not survive.
Posted by Not Sorry Feminism at 10:30 AM