What Do People Deserve?

Like laziness, the term "deserve" is a vague and fascinating term. The very concept of who deserves what and why is completely subjective and can be (and is) constantly manipulated to fit a person's agenda. It's also very often under the surface of what people are saying aloud. And it's closely connected to the concept of laziness. How many times have people decided that a person doesn't "deserve" such-and-such because they're "lazy."

There also seems to be a stark contrast between how people on the political right and those on the left view and use this concept of "deserving." Something I read recently pointed out that conservatives, no matter their level of wealth, focus intensely on ideas of what people deserve. Thinking more about the concept, I realized that both sides engage in this concept a lot, but the right's use of it is very negative while the left's is positive.

One of the reasons they do this is likely because you can't debunk such a statement with facts. What people deserve, just like whether or not they're "lazy," is a value judgement based on emotion and conjecture. I don't think arguments based on emotion are bad or useless, but when they're used to grind an argument to a halt just so the other person doesn't have to feel like they "lost," it's really annoying and also it reveals an unwillingness to examine their views, judgments, and selves. It's also really annoying when these same people are the ones who act like non-fact-based arguments are bad and useless and you immediately "lose" if you use them. Anyway.

This, of course, switches when you're talking about wealthy people or corporations. People on the right tend to think that the wealthy deserve every dollar they've made no matter how underhanded or illegal the tactics were to get that dollar, while people like me feel as though nobody deserves billions of dollars for being born to rich parents while millions of children are going hungry daily in the U.S. alone. This is likely due to people on the right hoping that someday they'll be obscenely rich and don't want anyone to take away a single imaginary yacht.

People in general are judgmental. It's a natural part of us that can be very helpful and good in certain situations, especially when it comes to protecting ourselves from toxic people. But we very much tend to take it too far. There's a difference between judging someone to be toxic and keeping them out of your life to protect yourself and deciding what another person does or does not "deserve," especially if those things are directly or indirectly life-or-death. That's just playing god. I'm not religious and I'm not sure if anything like a god exists but I don't want to play at one.

But regardless of how I feel about it, people go on every day thinking they can determine whether someone deserves to die or be denied a basic need or be denied something that would contribute to their physical and/or emotional well-being. And again, it's not always said like that. When people label a woman a "welfare queen," they're saying that she doesn't deserve welfare. When someone on disability benefits is called "lazy," they're saying they don't deserve those benefits. And when they need those benefits to live (which they really do), they're saying they deserve to die.

The question becomes whether people who are more apt to decide that oppressed people deserve bad things naturally go to the right, or whether the philosophies of the right make them negatively judgmental. Or maybe that's all conservatism really is? Maybe fiscal conservatism is just "poor people don't deserve help" and traditionalism is just "people in marginalized groups don't deserve equal rights or representation."

My belief is that all people deserve to have their basic needs met, no conditions, no questions asked. That includes health care. This, to me, seems so much kinder and more positive, and much less arrogant, than the conservative way of doing things. Ironic that in the U.S., the right is supposed to be full of Christians. But we don't need yet another reason that U.S. conservatives are incompatible with Christianity. 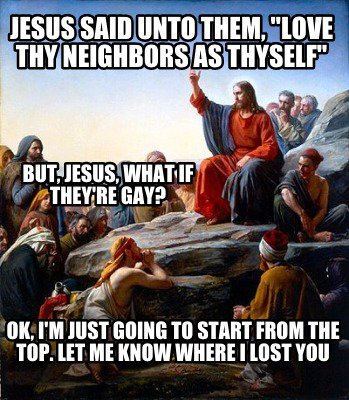 And yes, plenty of what I'm saying is judgmental. But I'm not saying that conservatives deserve to have their human rights denied or that they deserve suffering and death. That's the difference. Life and happiness for all, not just the few that I arbitrarily decide deserve it.
Posted by Not Sorry Feminism at 12:39 PM