Star Wars: Rogue One came out today, among the usual misogynistic man-whining about girls and people of color invading their safe space :( :( :(

Neo-Nazis and white supremacists all around have declared that they're boycotting the film, which is great news! Now we can all go see it in theaters free of horrible bigots who don't deserve to engage with any of the woman-created science fiction genre.

Meanwhile, some awesome guy apparently named Ron took some of the man-whining and did the best possible thing with it.


What Rogue One would be called if it was left up to the people currently having a meltdown in the Daily Mail comments section pic.twitter.com/tAQHxkPMbd
— TechnicallyRon (@TechnicallyRon) December 14, 2016


First of all, man-whiners: Peggy Whitson, a woman who is in space right now, is laughing at you, from space.

Secondly, BRING ON THE SPACE GAYS. 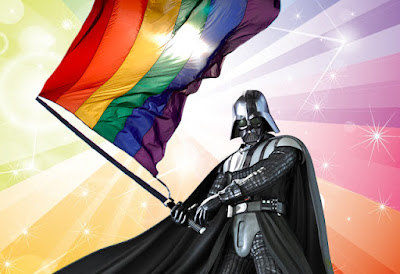 It will be full of gays next. I'm so excited.

These are just as good as the images Ron made of the comments on the official trailer on Youtube:


Thanks to the youtube comments section we have some brand new taglines for Rogue One pic.twitter.com/QPrC6hOkzp
— TechnicallyRon (@TechnicallyRon) August 12, 2016


I'm printing out the "women ruin everything" one and framing it.

Posted by Not Sorry Feminism at 2:00 PM