I've done a lot of thinking, and I've processed enough to realize that though Donald Trump is the face of the threat, he's not what really threatens us. It's actually difficult to determine how much damage Trump will do. He's less predictable than the Republican establishment. It could be said that he will probably do whatever is best for him. What he will decide that is could be more difficult to determine.

Donald Trump and His Cabinet

Unfortunately, his decisions so far are less than encouraging. By which I mean horrific. Here's a list of the people he's appointing to do all the work for him, since he doesn't want to do any:

Also, in spite of the fact that he talked a lot of shit about lobbyists, he's already hired a bunch of them for his various teams. For those people who voted for him because you thought things would change because he's not a career politician...

And finally, Newt Gingrich, our possible next Secretary of State, is calling for the creation of a new House Un-American Activities Committee. If you're not sure what that is, google "McCarthyism" and replace "communists" with "Muslims."

Despite all of the terrible things about Trump himself, the real threat is the people who are responsible for his election. These people can be broken up into a few different groups.

First, there are your everyday conservative citizens. These are the average, mostly white, working class people in the Midwest and the South, very often Christian, who are isolated from people of color and LGBT+ people. They're raised to believe that Democrats are rich, establishment assholes looking to ruin their lives with taxes and take their jobs/guns away, and/or are sinful deviants who are leading this country straight to gay Hell.

These people are bigots, but not necessarily lost causes. They'll defend their beliefs with all the vigor of the bullshit they've been fed their entire lives. They feel as though they're under attack by "the liberals" and will therefore go on the defensive the moment you bring up anything they view as liberal.

They're often low on the threat level, but the come on a large spectrum. Some of them are and will be perpetrators of hate crimes and bigoted harassment. Those with privilege can try to approach them with understanding and empathy and try to explain that there are oppressed people in this country, and that their chosen leaders don't treat these people as human, and that is a problem. The best approach may be to try and convince them that Republicans don't actually care about them at all, and in fact hate all poor and working class people like them.

If they don't budge, or if they become overly bigoted, and of course if they ever physically attack an oppressed person, reject and ostracize them for being unfit for human society.

Much higher on the threat list are the Republican politicians and pundits, and overt white supremacists and the alt-right.

We understand Republican politicians and pundits. They're the vanguards of capitalism. They'll do anything they need to do to maintain it and their power. For years now, they've been undermining our democratic process with gerrymandering and voter suppression. Even as the left gains numbers, these tactics are making it harder and harder to elect Democrats. And the Democrats have failed spectacularly to stop them.

The final threat, I believe, was the tipping point in the election on November 8, 2016.


The Alt-Right, AKA Fascists

These are the people, mostly white men, who I argued with for years. Men who would come onto this blog and onto my Tumblr blog to tell me that I'm wrong, to call me a feminazi, to tell me that rape culture and patriarchy aren't real, that feminists are the real problem with the world. That the world has been "feminized" and no longer values men.

Then, not long ago, these people disappeared. Not completely, but the really bad ones seemed to vanish, and for the most part, I stopped getting hateful anonymous messages and those people on Tumblr stopped reblogging my posts to spout the same tired arguments about how wrong I am. I thought maybe I'd just finally blocked all the worst accounts. And I was relieved, because arguing with these people clearly wasn't good for me.

Turns out, they've just been hiding. Waiting for election day so that they could all turn out and boost Trump's numbers when everyone thought Hillary Clinton was a sure thing. 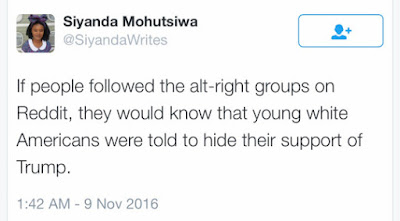 I've always thought that I should follow these groups, but reddit and similar cesspools horrify me to my core and I never did. As usual, it's women of color picking up the slack. And I believe her 100%, because again, I've argued with these men and I've glimpsed into their worlds and this is totally something they would do.

And it's terrifying. I knew they were organized, but this is to a level I never would have guessed. Because I didn't keep tabs on them. And because apparently no one would publish Mohutsiwa's findings, very likely because they were afraid of the targeted attacks that these assholes are famous for. I myself had actually pitched investigative pieces a could of times, volunteering to go into reddit and 4chan and 8chan, and deeper if I could find it, and report on their fuckery. I never got any interest in these pitches, and I'd chalked it up to my lack of a name in the writing world. But this woman, who is much more accomplished than I, couldn't get anyone to go for that either.

Anyway, it gets scarier. She's also observed how they indoctrinated young white men into the alt-right philosophy, many of whom come from group one up there, but can come from any background as long as they feel frustrated and disenfranchised and like they've been denied things that they've been told they're entitled to.

They are just as organized in their indoctrination. They have the formula down. (TW: ABLEIST LANGUAGE): 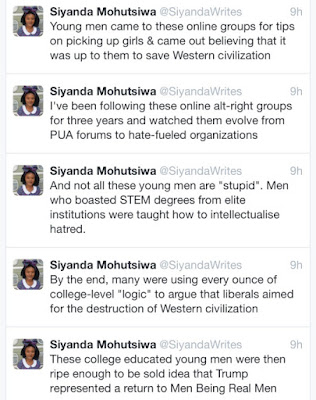 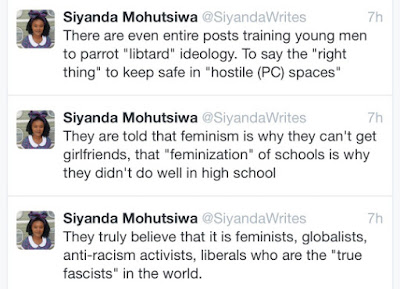 This is not the first I've heard about this but I underestimated how effective it apparently is.

This is the alt-right. But what they really are is fascists, and I very much encourage everyone to call them that. I know a lot of people don't want to use that word because so many conservative people have overused it to describe people who think racial and other slurs are inappropriate for everyday conversation, and also because of the incredibly successful disparaging of people like communists and anarchists who have been trying to warn us about actual fascists. But we need to use that word because that is what they are. Fascists, white supremacists, and neo nazis. Do not soften your language.

So this is what we're facing. Trump's team is full of bigots just as bad as Mike Pence and billionaires who will run this country like an international conglomerate that depends on sweat shop labor to make its obscene profits. A lot of people are still watching Fox News unironically. And all of this hell is supported by a sneaky cabal of neo nazis, white supremacists, and general fascists called the alt-right who think they're the oppressed ones. Now the KKK is celebrating in the streets and hate crimes are cropping up everywhere.

No more Mx. Nice Lefty.
Posted by Not Sorry Feminism at 11:00 AM