The list of horrors that I read about yesterday left me stunned, my head foggy and swirling. At one point I became terrified. I questioned how it is that I could keep coming into work, doing my unremarkable job at a tech company, and pretend that everything is normal when the nation is watching as a force of neo-Nazis and general white supremacists rises out of the shadows and prepares to take over the country.

Clearly, part of how I'm doing it is by blogging at work because they don't have enough for us to do. So I'm gonna do more important work until they get their shit together.

Yesterday, I saw a conference of neo-Nazis celebrating the election of Trump, shouting "Heil Trump" and giving the Nazi salute, and I saw a banner headline on fucking CNN that said "Alt-Right Founder Questions if Jews Are People."

I know you don't want to believe me, but here it is: 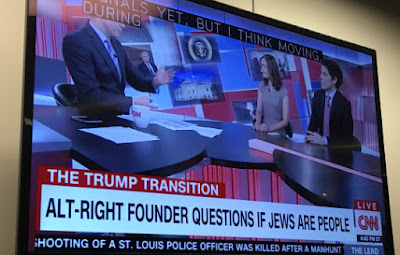 It's bad enough that anyone dared to pose that question out in the open. But what in the fuck is CNN doing putting that headline up on the air as though it's a normal thing to happen? That headline should read "Horrific Anti-Semite Spouts Dehumanizing Nazi Rhetoric."

This is not okay. The neo-Nazis are going to see this and become even bolder, because now the humanity of Jewish people has become a "question" and a debate. This is exactly how we went down the path to the Holocaust last time.

I was shocked by that Twitter story that explained how fast fascism moves. Yet here I am, still shocked that the neo-Nazis have become so bold so quickly. I'm also shocked, and I can thank my gentile privilege for this, that anti-semitism has remained so widespread and so strong over the years. But clearly it has. And here we are.

Don't believe me? Maybe listen to the U.S. Holocaust Memorial Museum, which was only a few blocks away from yesterday's Nazi "Heil Trump" conference.

The targeting of Jews was central to Nazi racist ideology. The Germans attempted to kill every Jewish man, woman and child they could find.  Nazi racism extended to other groups. By the end of World War II, the Germans and their collaborators had murdered six million Jews and millions of other innocent civilians, many of whom were targeted for racial reasons.

The Holocaust did not begin with killing; it began with words. The Museum calls on all American citizens, our religious and civic leaders, and the leadership of all branches of the government to confront racist thinking and divisive hateful speech.


These people know what they're talking about.

We can, in part, thank the soft liberal "everyone's opinion is valid" rhetoric for letting this shit happen. And after that, we need to shut this shit down.

I'm seriously considering printing out fliers and posting them around my area that explain in so many words that Nazi shit will not be tolerated here. There's been at least one report of a hate crime in the city of Bothell where I live, just north of the supposedly liberal Seattle. Everyone needs to do what they can locally. No tolerance for Nazis.
Posted by Not Sorry Feminism at 1:00 PM