This documentary covers the incredible journal of a woman who is about to become the first Somali-American elected to an American legislature.

Minnesota's Ilhan Omar is all the proof we need that 2016's election will go down as one of the most exceptional contests in American history, despite its virulently Islamophobic rhetoric. A survivor of Somalia's civil war, Ilhan spent four trying years in a Kenyan refugee camp before moving to the United States with her family at age 12. After settling in Minneapolis' Cedar-Riverside neighborhood — a community renowned for its dynamic economic and ethnic diversity — she went to work for Women Organizing Women, where she advocated for East African women seeking positions in civil leadership. Fast-forward to 2016: Ilhan stepped into such a role herself, winning a seat as one of Minnesota's state representatives.

Thank you, Ilham Omar. Thank you so much.

Look at this incredible lady: 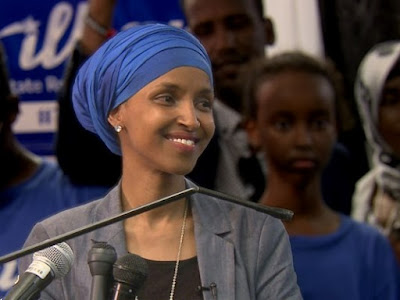 Women like her give me hope. She is perfect and we don't deserve her.
Posted by Not Sorry Feminism at 3:00 PM